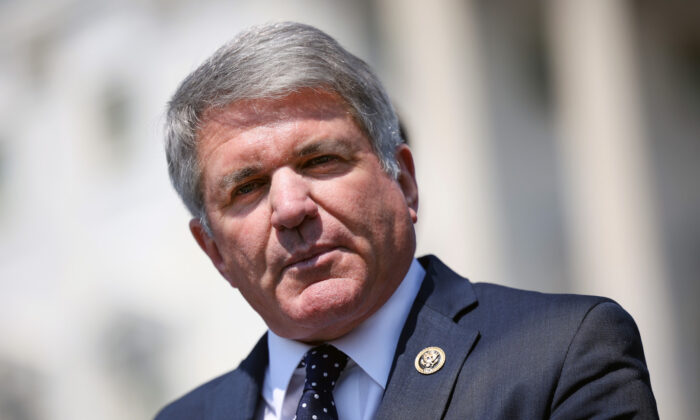 Republicans will win at least 40 seats in the House of Representatives in the November midterm elections because of President Joe Biden’s unpopularity, Rep. Michael McCaul (R-Texas) predicted in an interview.

McCaul, the top Republican on the House Foreign Affairs Committee, is “very confident” about the party’s prospects in the election, he told Fox News on April 24. Historically, the party in the minority tends to pick up some seats after the president’s first term in the White House.

“I predict we’re going to get probably at least 40 seats because this president has been so unpopular when it comes to inflation, gas prices … the foreign policy mistakes that he’s made, and quite frankly, they see him as a weak president.”

If Republicans regain majorities in both the House and Senate this fall, the GOP will reinstate former President Donald Trump’s border policies that were halted by the Biden administration, he said.

That would include bringing back the “Remain in Mexico” policy, under which migrants seeking entry into the United States would stay in Mexico for several months before appearing in front of an immigration judge.

However, McCaul isn’t sure whether Mexico will agree to such an agreement again the way it did during the Trump administration.

McCaul’s comments follow Sen. Elizabeth Warren’s (D-Mass.) warning to Democrats that the party will suffer in the midterm elections if they continue to fail to control persistent supply issues and record inflation.

“Democrats win elections when we show we understand the painful economic realities facing American families and convince voters we will deliver meaningful change. To put it bluntly: if we fail to use the months remaining before the elections to deliver on more of our agenda, Democrats are headed toward big losses in the midterms,” Warren said in an op-ed in The New York Times.

Numerous polls are showing weak public approval ratings for Biden. During his fifth quarter in office, only about 41.3 percent of American adults, on average, approve of his performance as U.S. president, according to a poll published on April 22 by Gallup.

Pollster John McLaughlin is predicting a major win for the Republican Party in the House while Kyle Kondik and J. Miles Coleman, editors at the University of Virginia’s Center for Politics, expect the GOP to win 25 to 35 House seats in the midterms.