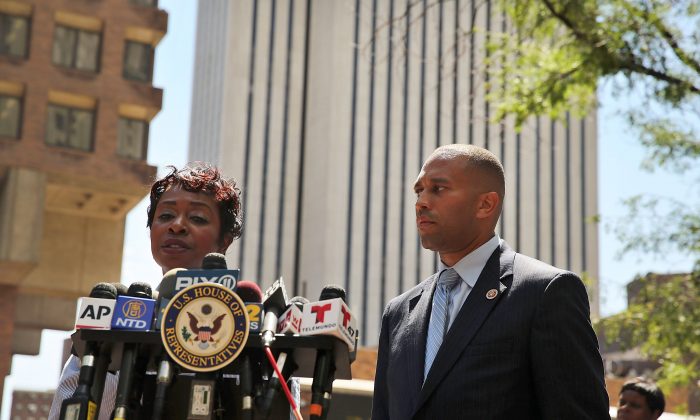 House Representatives from New York Yvette Clarke and Hakeem Jeffries call for a federal investigation of the death of Eric Garner at One Police Plaza on August 14, 2014 in Manhattan. (Spencer Platt/Getty Images)
New York

“We will never forget the reckless disregard for Eric’s humanity shown by the officers and first responders that led to his demise,” said Congresswoman Yvette Clarke, a signatory of the letter to Holder.

“The death of Eric Garner demonstrates a fundamental flaw of the policing in NYC today, some of the policies, particularly the broken windows approach, which is just a cousin to stop-and-frisk,” Clarke continued.

At 1 Police Plaza with @repjeffries to discuss the death of Eric Garner. pic.twitter.com/2nfcefqIJM

Congressmen Charlie Rangel, Jose Serrano, Hakeem Jeffries, Gregory Meeks, and Nydia Velazquez were the other signatories of the letter.

Congressman Jeffries argued that a federal investigation was needed because of the institutional bias the Staten Island District Attorney has with regards to the city’s police department.

“The local DA relies on the police department to make its cases,” he said. “The FBI would be a more impartial enforcement agency to conduct the investigation.”

As an example of bias, Jeffries cited a string of high-profile cases from the 1980s and 1990s where police officers accused of killing civilians were acquitted in state courts.

“Officer Livoti was acquitted in New York State Court; it wasn’t until the Department of Justice stepped in that Francis Livoti was held to the account for the death of Anthony Baez,” Jeffries said.

Baez was a 29-year old security guard when he was fatally shot by NYPD officer Francis Livoti in an arrest in 1994.

The police department’s “broken windows” crackdown on minor offenses is the secondary target of the letter, which alleges that the policy discriminates against minority communities in the city. The letter cited in a footnote a recent New York Daily News analysis of summonses for minor violations.

“I’m calling for DOJ inquiry into whether broken windows policing are violating the civil rights of communities of color across the city,” said Jeffries.

Jeffries is a member of the House Judiciary Committee, which has a task force on over-criminalization in America. The congressman said he would make sure “broken windows is part of that inquiry.”

However, none of the signatories at the press conference promoting the letter—Jeffries, Clarke, and Meeks—were willing to call for the resignation of NYPD commissioner William Bratton, considered the architect of the “broken windows” policy, which he introduced in the NYPD in the 1990s.

“I’m not calling for commissioner Bratton to step down,” Jeffries said, adding that the commissioner is a “talented law enforcement professional.”

Missing too, were criticism of Mayor Bill de Blasio, who has stood by the police commissioner after the public outcry over Garner’s death, which many attribute to broken windows policing.

In a press conference on August 13, de Blasio, when asked whether published reports of his willingness to sack Bratton to bridge relations with Al Sharpton was true, reaffirmed his support for the commissioner.

“I have a high-pain threshold when it comes to untruths being told in print, but this is ludicrous. It’s inappropriate. It’s idiotic,” the mayor said. “I don’t know how many times I’ve said we have the finest police leader in the United States—and I believe that in my heart. I think Bill Bratton is doing an extraordinary job.”

De Blasio had previously welcomed a federal investigation of the Garner case, saying the city would “absolutely cooperate,” but also said he believed the Staten Island DA would “do their investigations effectively.”