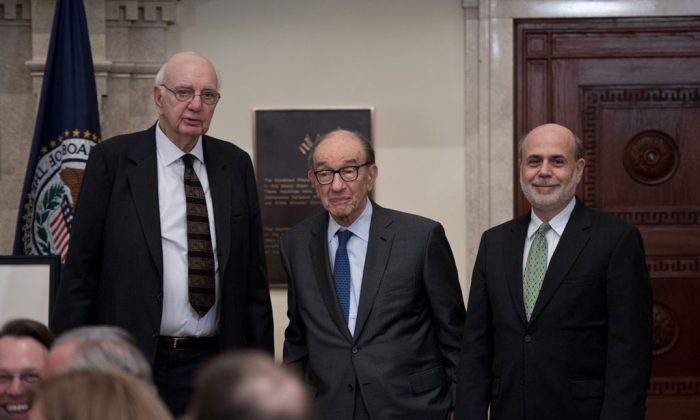 US Federal Reserve chairman Ben Bernanke (R) and former chairmen Alan Greenspan (C) and Paul Volcker pose during a ceremony marking the centennial of the founding of the Federal Reserve in Washington on Dec. 16, 2013. (Nicholas Kamm/AFP/Getty Images)
Business

WASHINGTON—The House Tuesday rejected legislation altering a key provision of the 2010 Dodd-Frank overhaul of financial services regulations that would give U.S. banks another two years — to 2019 — to ensure that their holdings of certain complex and risky securities don’t put them afoul of a new banking regulation.

At issue is the so-called Volcker Rule, part of the financial overhaul law, which would limit banks’ riskiest trading bets that could implode at taxpayers’ expense. That kind of risk-taking on Wall Street helped trigger the 2008 financial crisis.

The Federal Reserve in April gave banks until July 2017 to sell off their holdings of so-called collateralized loan obligations, which are mainly backed by commercial loans to higher-risk companies. That came atop a previous one-year extension by the Federal Reserve, to July 2015.

The rule is named for Paul Volcker, a former Fed chairman who was an adviser to President Barack Obama during the financial crisis. Volcker urged a ban on high-risk trading by big banks to diminish the likelihood that taxpayers might have to rescue them, as they did after the crisis, with hundreds of billions of dollars in government aid.

Wall Street banks had pressed for an outright exemption for the securities from the Volcker Rule’s ban on high-risk investments; the Fed didn’t go that far. The banks had contended that without an exemption, they would be forced under the Volcker Rule to shed their CLO securities at a disadvantage.

The move comes on the heels of a GOP maneuver last month to insert into a must-pass spending bill a provision to relax the regulation of investments known as derivatives.

Under the Dodd-Frank law, banks were required to spin off — or “push out” their derivatives business into a subsidiary separate from the federally insured bank. The idea was to prevent banks from borrowing against depositors’ money to make outsize bets that carry huge risks. But last month’s Republican provision repealed that requirement.