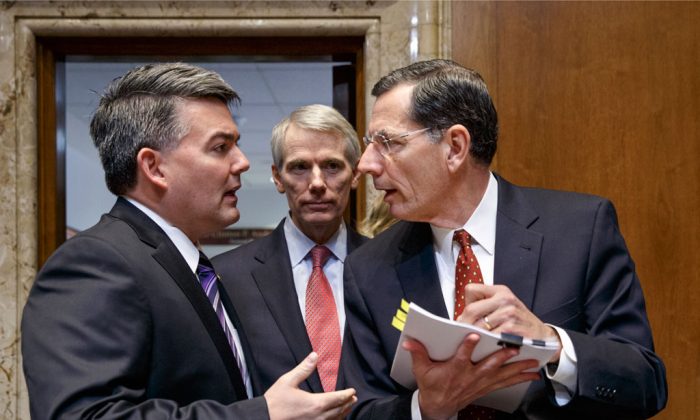 Senate Energy and Natural Resources Committee members, (L-R) Sen. Cory Gardner (R-Colo.), Sen. Rob Portman (R-Ohio), and Sen. John Barrasso (R-Wyo.) confer on Capitol Hill in Washington, Thursday, Jan. 8, 2015, as the committee crafts a markup of the long-stalled Keystone XL pipeline bill. The bill, at the top of the GOP agenda, was passed out of the committee and will go to the Senate floor for debate. (AP Photo/J. Scott Applewhite)
Politics

WASHINGTON—As House Republicans prepared to pass legislation Friday to authorize construction of the Keystone XL oil pipeline, Nebraska’s highest court removed a major obstacle to the project and a major reason behind President Barack Obama’s opposition to the bill.

“President Obama is now out of excuses for blocking the Keystone pipeline and the thousands of American jobs it would create,” said House Speaker John Boehner. “Finally, it’s time to start building.”

The state Supreme Court tossed out a lawsuit Friday challenging the approval of the pipeline’s route through that state, a decision that could change the dynamics in the political tug-of-war between the White House and the Republican-controlled Congress over the pipeline. Republicans have made approving the $7 billion project their first priority, and the House was expected to deliver later Friday by easily passing the bill. The Senate will begin debate next week.

Obama has said he needed the Nebraska ruling before deciding whether the cross-border pipeline is in the national interest.

“Today’s ruling provides the perfect opportunity for the president to change his unproductive posture on this jobs project and reverse his veto threat,” McConnell said. “The president now has every reason to sign it.”

In a statement, a White House spokesman said the court’s decision will have no effect on the president’s plan to veto the project.

“Regardless of the Nebraska ruling today, the House bill still conflicts with longstanding executive branch procedures regarding the authority of the president and prevents the thorough consideration of complex issues that could bear on U.S. national interests, and if presented to the President, he will veto the bill,” said deputy press secretary Eric Schultz in a statement.

Friday’s vote in Congress will be the 10th time since July 2011 that the House has voted on legislation advancing the pipeline, and the outcome is expected to be no different: It will pass.

A Senate committee on Thursday cleared an identical bill. The Senate bill has the backing of 60 members, enough to pass the full chamber. A test vote is set for early next week.

Earlier this week, the White House said Obama will veto the bill if it passes the Republican-controlled Congress because it “would authorize the project despite uncertainty due to ongoing litigation in Nebraska.”

On Friday, the court let stand a 2012 state law that allows the governor to empower Calgary-based TransCanada to force eastern Nebraska landowners to sell their property for the project.

If the decision had gone the other way, the State Department, which is in charge of evaluating the pipeline’s environmental risks, may have had do additional analysis.

Environmentalists, who have long framed the decision over the pipeline as a test of Obama’s commitment to fight climate change, said Friday that it still fails the climate test and that Obama should reject it outright.

The pipeline would carry more than 800,000 barrels of oil a day from Canada to Texas refineries.

“No matter the route, as long as the pipeline is carrying tar sands oil it is a global warming disaster and fails the president’s climate test,” said May Boeve, executive director of 350.org, an advocacy group that arranged many of the massive protests against the project. “It’s time for President Obama to build on his veto threat and reject Keystone XL outright.

Republicans say Obama is derailing a bipartisan bill to improve the nation’s energy infrastructure that the majority of Americans want. The $5.4 billion project, which would move tar sands oil from Canada to Gulf Coast refineries, was first proposed in 2008.

“The president has been hiding behind the Nebraska court case to block this critical jobs project,” said Rep. Fred Upton of Michigan, the top Republican on the House Energy and Commerce Committee, hours before the House was supposed to start debate on the bill. “With that contrived roadblock cleared, the White House is now out of excuses, and out of time.”