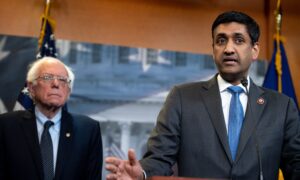 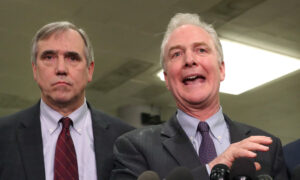 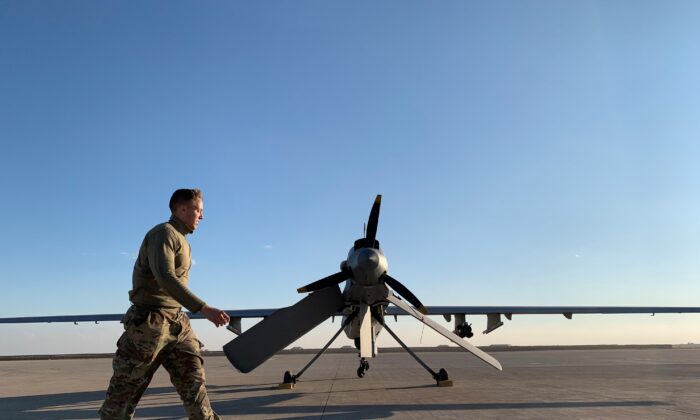 A member the U.S. forces walks past a drone in the Ain al-Asad airbase in the western Iraqi province of Anbar on Jan. 13, 2020.(Ayman Henna/AFP via Getty Images)
Trump Presidency

One measure would block funding for any use of military force in or against Iran unless Congress declares war while the other would repeal the 2002 Congressional Authorization for Use of Military Force (AUMF) against Iraq.

“For far too long, Congress has been missing in action on matters of war and peace—but today, we took a historic step to reassert our Constitutional authority and stop our endless wars by voting to repeal the 2002 Iraq AUMF,” Rep. Barbara Lee (D-Calif.), who sponsored the second bill (pdf), said in a statement after the vote.

Rep. Ro Khanna (D-Calif.), who introduced the other bill, said that it sent a clear message of “no more unconstitutional wars.”

“The American government has spent trillions of taxpayer dollars fighting endless wars across the Middle East. Today, Congress passed two historic pieces of legislation to reassert our authority over matters of war and peace,” he said in a statement.

Khanna sponsored legislation that passed the House in 2019 but was left out of the final version of the military funding bill that was passed just before Christmas. Lee also introduced an amendment to repeal the 2001 AUMF in 2019.

The 2002 AUMF and a similar authorization passed the year prior in the wake of the Sept. 11, 2001, terror attacks have long been targeted by some lawmakers. A top Trump administration official said the U.S. airstrike that took out Iranian General Qassem Soleimani in Baghdad in December 2019 was done legally under the authorization of military force.

Khanna’s bill passed 228-175 and Lee’s resolution passed 236-166. Both earned support from some Republicans, though several who voted for at least one piece last year flipped to vote against a resolution or two this time around, including Rep. Chip Roy (R-Texas).

“I welcome a debate in the U.S. House in which we consider the formal end of the 2002 AUMF regarding Iraq. That is why I voted today in favor of a formal repeal to the ’02 AUMF,” Roy said in a statement.

“I could not, however, vote for the ‘No Wars Against Iran Act.’ The timing is not right, given that our bases are taking fire from Iran and its proxies.”

Tensions were high with Iran last month after the killing of Soleimani but after Iran fired missiles at Iraqi bases hosting U.S. troops, Trump said he was pushing for peace with the country.

Neither measure approved on Thursday is expected to pass the Republican-held Senate, though lawmakers urged senators, who are embroiled in the impeachment trial against Trump, to pass the legislation.

Sponsors of the bills added them onto legislation that would create commemorative World War II coins. That legislation was already passed by the Senate.

Republicans said the Democratic sponsors used the technique to stem debate on the resolutions.

“It is unfortunate that democrats rejected an opportunity for a bipartisan Authorization for Use of Military Force (AUMF) bill. Instead, it has been shoved into a bill originally intended to honor veterans (Merchant Mariners of WWII Congressional Gold Medal Act) in order to void debate, eliminate Republican amendment, and hit the House floor during the Senate impeachment trial,” Rep. Russ Fulcher (R-Idaho) said in a statement. “What a horrible message to send to our enemies! Everyone agrees we need to address this issue, but not like this.”

The latest resolutions from the House followed a non-binding resolution passed in early January that urged Trump to consult with Congress before using military force against Iran. The resolution earned opposition from eight Democrats and support from three Republicans, including Rep. Matt Gaetz (R-Fla.).

“I support the president, killing Soleimani was the right decision, but engaging in another forever war in the middle east would be the wrong decision,” Gaetz said in a statement.

The White House said it opposed both House measures but Trump took to Twitter late Wednesday and wrote that he wanted lawmakers on both sides “to vote their HEART!”