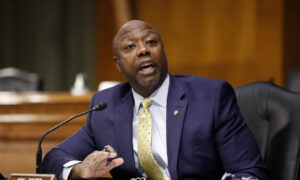 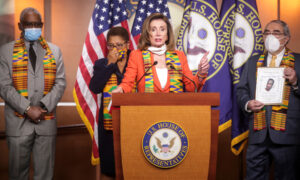 Republicans Respond to Democrats Blocking Debate on the JUSTICE Act
0 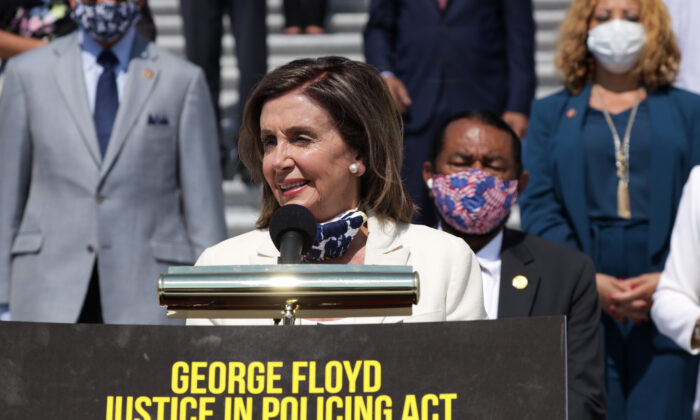 WASHINGTON, DC - JUNE 25: U.S. Speaker of the House Rep. Nancy Pelosi (D-CA) speaks as other House Democrats listen during an event on police reform June 25, 2020 at the east front of the U.S. Capitol in Washington, DC. The House is scheduled to vote on the George Floyd Justice in Policing Act today. (Photo by Alex Wong/Getty Images)
Politics

House Democrats passed their police reform package 236-181 after 5 1/2 hours of debate, basically along party lines on Thursday, with 3 Republicans voting in favor of the bill.

The vote on the George Floyd Justice in Policing Act comes amid ongoing protests against alleged police brutality and racial injustice that have wreaked havoc in major cities across the nation. Floyd, a Black man, died in custody after a Minneapolis police officer knelt on his neck for almost 8 minutes as three other police officers watched on without intervening.

Speaker Nancy Pelosi said in a press conference on the steps of the Capitol on Thursday morning, “Today, we have the opportunity and the obligation to ensure that his [Floyd’s] death and the death of so many others are not in vain.”

The Justice in Policing Act, which was spearheaded by Congressional Black Caucus Chairwoman Karen Bass, comes a day after Democrats blocked a vote on the GOP’s police reform package—the JUSTICE Act—in the Senate.

Bass helped design the Democrats’ police reform package to include a ban on no-knock warrants in drug cases and amending what qualifies police for immunity, which would make it easier for courts to find officers personally liable for any violations of an individual’s civil rights. The bill also seeks to amend federal civil rights law so that it no longer requires prosecutors to prove that an officer’s harmful actions were “willful,” and create a national registry of complaints, disciplinary records, and termination records of police officers.

The Senate bill would require increased data collection and reporting of use of force and no-knock warrants, provide grants for law enforcement to be equipped with body cameras and require departments to maintain and share officer disciplinary records. It also would establish several commissions, including one studying the conditions affecting black men and boys and one reviewing best practices for police departments.

In a speech on the Senate floor after the failed vote on Wednesday, Sen. Tim Scott (R-S.C.) said he offered Democrats the opportunity to vote on up to 20 amendments to his legislation. But they said “no.”

Republicans Senators condemned the Democrats for refusing to proceed with debate to amend Scott’s bill on the Senate floor on Wednesday.

House Republicans opposed the Justice in Policing Act because of a few key issues, including having no input in the process of drafting or amending the legislation, and because they did not want to strip away the legal protections that qualify police for immunity when they are under pressure to make split-second decisions in life-threatening encounters.

Democrats in the House and Senate urged Republicans to vote for their reform bill, saying that it is transformative as it has provisions that the GOP bill does not include.

“Today @SenateDems stood together to demand a better bill to protect Black lives and end police brutality. And we’ve one ready to go @SenateMajLdr McConnell should stop dragging his feet and give us a vote on @SenKamalaHarris and @SenCoryBooker’s Justice in Policing Act,” said Sen. Elizabeth Warren (D-Mass.).

House Republicans said that they were shut-out of offering any amends to the Justice in Policing Act and that Senate Democrats did not want to work with GOP members to get a bill that the Senate will pass and the president will sign.

Read More
Black Conservative Radio Host Sonnie Johnson Tells Trump Over-Policing Must End
Black Lives Matter Organizer: If US ‘Doesn’t Give Us What We Want, Then We Will Burn Down This System’

Rep. Bob Woodall (R-Ga.) said that in order for the police reform legislation to be passed and made into law, it has to be bipartisan and the House Democrat’s Justice in Policing Act is not.

During the debate on the House floor before votes were cast, Rep. Rich Hudson (R-Va.) addressed Americans, saying that Democrats “want you to believe that failure to get real reform is the fault of the Republicans when they shut us out of the process and they blocked us from having an open debate in the Senate.”

“Wake up America. The Democrats in Congress hope you aren’t smart enough to see the truth. Wake up and demand that your elected officials work together to get you the reform that all people of good will demand.

“We owe it to the memory of George Floyd and to good police officers who risk their lives everyday to protect us,” he said.