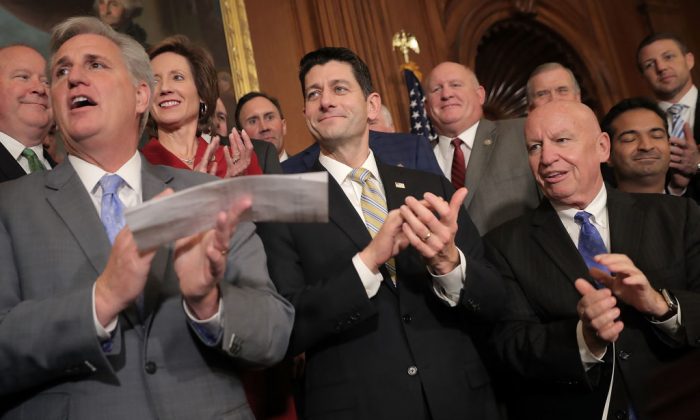 Speaker of the House Paul Ryan (R-Wis.) is joined by fellow House Republicans for a news conference following the passage of the Tax Cuts and Jobs Act in the Rayburn Room at the U.S. Capitol in Washington on Nov. 16, 2017. The House passed the tax reform legislation, moving them one step closer to a promised tax cut before the end of the year. (Chip Somodevilla/Getty Images)
Politics

The Republican-controlled House passed the bill by a vote of 227–205.

“The historic legislation before us today represents a crucial step to fulfilling our tax reform promise to the American people,” said House Ways and Means Committee Chairman Kevin Brady before the floor vote.

For tax reform to become law, both the House and the Senate have to pass the same legislation and send it to the president.

Senate Republicans introduced their own tax plan on Nov. 9, which has some significant differences to the House one.

The Senate is expected to vote on its version of the bill after Thanksgiving. If it passes, a conference committee will draft a compromise bill that both houses can accept.

Republicans have an ambitious schedule to get a bill on the president’s desk by the end of the year. If they succeed, it will be the first major tax reform since 1986.

Here are the key provisions of the House tax bill:

In an effort to simplify the individual tax rates, the bill condenses the current seven tax brackets down to four: 12 percent, 25 percent, 35 percent, and 39.6 percent. And it substantially increases income limits for each tax bracket.

The plan leaves the top individual tax rate at 39.6 percent, which would be applied to high-income earners. These taxpayers would also pay an additional 6 percent surcharge on the first $200,000 they make over $1 million; after paying that “bubble tax,” their rate would return to 39.6 percent.

The standard deduction would nearly double, to $12,000 for individuals and to $24,000 for married couples filing jointly.

The bill expands the child tax credit from $1,000 to $1,600 per child. However, the deduction for personal exemptions would be eliminated.

The bill would eliminate most itemized deductions including for medical expenses and student loan interest. But there would be no changes to 401(k) retirement plans.

Overall, House Republicans claim that their plan will simplify the tax code by eliminating many itemized deductions and enable nine out of ten taxpayers to file their taxes using a simple postcard-style system.

2. Repeals state and local taxes (SALT) but allows deductions up to $10,000 for property taxes.

Under current law, taxpayers can deduct state and local income and sales taxes from their federal taxable income. The House bill would only allow a deduction for state and local property taxes up to $10,000.

Under the House bill, existing homeowners can keep their mortgage interest deduction, but future purchases will be capped at $500,000 (lower than the current cap of $1 million).

4. Reduces the corporate income tax rate from 35 percent to 20 percent, which is the centerpiece of tax reform.

The cut will be applied immediately, while the Senate’s tax plan would delay it until 2019.

The bill also sets anti-abuse rules that allow only 30 percent of a company’s revenue to be eligible for that rate. The other 70 percent is treated as wage income subject to the individual tax rate. This results in a blended tax rate of 35 to 38 percent for many small businesses.

Many service businesses, including law, accounting, consulting, financial service and brokerage firms, generally would not be able to benefit from the preferential rate and would continue to be subject to the individual tax code.

6. Proposes a shift from worldwide taxation to a territorial system.

The House bill seeks to level the playing field between U.S. and foreign companies. So it moves from a worldwide taxation system—which taxes income earned anywhere in the world—to a territorial system, only taxing income earned inside the home country.

As a transition to the territorial system, there will be a one-time tax payment on profits that U.S. multinationals have already accumulated overseas. The House bill proposes a rate of 14 percent for liquid assets and 7 percent for other assets.

The bill also includes significant rules to limit tax avoidance, such as the strategy of base erosion and profit shifting, which is used by companies to artificially shift profits to low- or no-tax countries.

The House bill increases the threshold for the value of inheritance to $10 million and eliminates it completely in six years’ time.