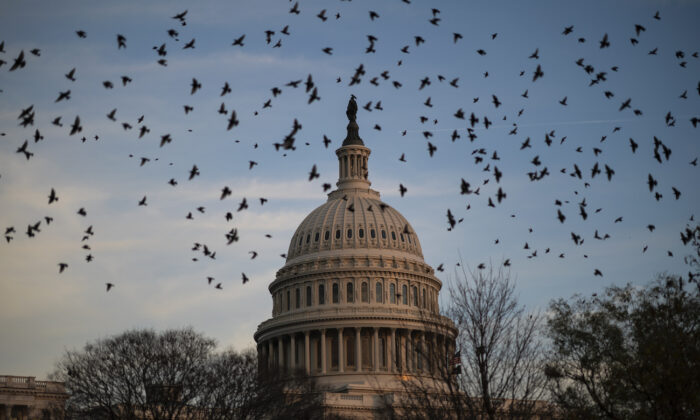 A flock of birds flies near the U.S. Capitol at dusk in Washington, on Dec. 2, 2021. (Drew Angerer/Getty Images)
Congress

The House of Representatives voted late Thursday to pass a stopgap spending bill in efforts to avert a government shutdown ahead of a midnight deadline.

The vote was 221–212 in the Democratic-controlled chamber. Republican leadership urged members to vote no. The lone Republican vote in support came from Rep. Adam Kinzinger (R-Ill.).

The continuing resolution is now sent to the Senate where it needs to be approved before the midnight deadline.

The measure is needed because Congress has yet to pass the 12 annual appropriations bills to fund government activities for the fiscal year that began on Oct. 1.

Some Republicans have suggested they may delay passing the measure if they don’t get enough votes to support an amendment to defund President Joe Biden’s vaccine mandate for workers.

Republican Sens. Mike Lee (R-Utah), Ted Cruz (R-Texas), and Roger Marshall (R-Kan.) said the government could possibly undergo a partial temporary shutdown over the weekend while the Senate moves toward eventual passage. The delay would be unlikely to majorly affect federal agencies and workers.

“All I’m asking for is a vote. It would take 15 minutes, we could do it right now,” Lee said in pushing for a simple majority vote to include defunding vaccine mandates in the upcoming government appropriations bill.

The senator said Democrats knew last month from a letter that several Republicans would use all means at their disposal to oppose legislation that funds or allows the enforcement of the employer vaccine mandate. He blamed Senate Majority Leader Chuck Schumer (D-N.Y.) for not negotiating and for ignoring their position.

If the choice is between “suspending nonessential functions” or standing idle while Americans lose their ability to work, “I’ll stand with American workers every time,” Lee said.

Meanwhile, Schumer said Thursday, “This is a good compromise that allows an appropriate amount of time for both parties in both chambers to finish negotiations on appropriations.”

Senate Minority Leader Mitch McConnell (R-Ky.) reiterated there would be no shutdown. “We’re not going to do that,” he said Thursday.

The 100-seat Senate is split 50–50 between Democrats and Republicans, with Vice President Kamala Harris, a Democrat, able to vote as a tie-breaker.