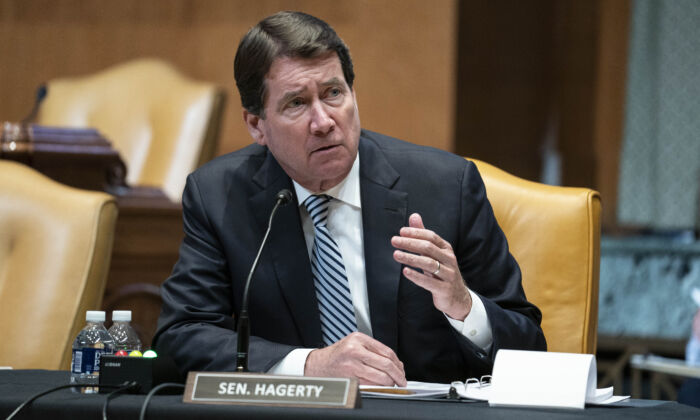 A Republican senator’s bill designed to speed up official approvals for building new U.S. semiconductor factories that was approved in January by the Senate is now headed to President Joe Biden for signature after the House of Representatives approved the measure on July 29.

The House vote was 303–89 in favor of the unusually short, less than one page, and titleless bill (pdf) that was first introduced by Sen. Bill Hagerty (R-Tenn.), with co-sponsors Sens. Rob Portman (R-Ohio) and Angus King (I-Maine). The “yea” votes in the House included 175 Republicans (29 didn’t vote) and 121 Democrats, with only 10 of the latter not voting. All 89 votes in opposition were cast by Democrats.

The Senate unanimously approved the measure on Jan. 14. House approval was temporarily delayed by environmental groups that sought to kill it by protesting its consideration under a suspension of the rules.

The House started its August recess on July 31, and when it returns in September, the 2022 midterm congressional election campaigns will be in full swing. Congress rarely passes major bills between August and November of election years.

The bill amends the Fixing America’s Surface Transportation Act of 2015 to include in its Section 41 permitting provisions to cut federal red tape in approving new projects for the production of a host of critical digital national security and consumer products, most notably covering construction of new U.S. factories to make semiconductors.

Hagerty estimates that his bill will reduce the time frame of the regulatory approval process, which currently can take up to five years, to about 18 months.

“I ran for the Senate to increase opportunity and prosperity for American families and to ensure that America wins the competition with the Chinese Communist Party that will define this century,” Hagerty told The Epoch Times following the House vote.

“We must end our reliance upon China and reassert our manufacturing independence; our national security depends upon it.

“Reducing government red tape will unleash American competitiveness and innovation by promoting faster construction and operation of manufacturing facilities for critical products that we must make in America.”

China currently produces 24 percent of all semiconductors, followed by Taiwan at 21 percent, and South Korea at 19 percent. U.S.-based firms such as Intel and Texas Instruments account for 10 percent of the world’s semiconductor manufacturing, according to the Semiconductor Industry Association.

An estimated 90 percent of the most advanced semiconductors are manufactured by the Taiwan Semiconductor Manufacturing Co.

If, as expected, Biden signs Hagerty’s bill, it will be the first instance during the current presidency of a freshman Republican senator succeeding in gaining passage of a measure through both the Democratic-controlled Senate and House and then becoming law.

“Reducing our economic reliance on China and other foreign nations is critical as America faces strategic economic and national security threats due to this dependence,” said Robert Lighthizer, who was the U.S. trade representative during the Trump administration. “I applaud Senator Hagerty’s leadership and efforts to strengthen our national security, create American jobs, and make our nation competitive again.”

“Nissan is committed to supporting measures that will help to ease supply chain disruptions and the semiconductor chip shortage, and we appreciate Senator Hagerty’s leadership on national and economic security issues that will address these challenges,” said Andrew Tavi, Nissan Americas’ senior vice president for external affairs. “Senator Hagerty’s support will help ensure the Tennessee and US economies remain strong and grow more independent through investments in semiconductor plants and advanced technology in the U.S.”