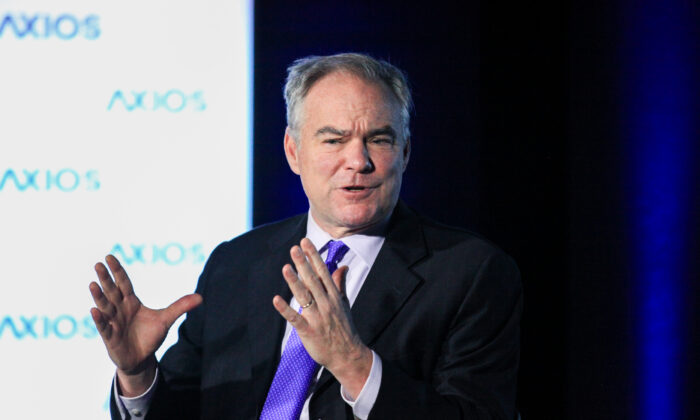 Sen. Tim Kaine (D-Va.) speaks at an event in Washington in a 2018 file photograph. (Holly Kellum/NTD)
By Isabel van Brugen

The House of Representatives voted on March 11 in favor of a resolution aimed at limiting President Donald Trump’s ability to take military action against Iran without congressional approval.

The War Powers resolution was introduced by Sen. Tim Kaine (D-Va.) with bipartisan support and was approved by the House on Wednesday in a largely party-line 227-186 vote. Six Republicans voted in favor of the resolution, while six Democrats and 180 Republicans opposed it.

It declares that Trump gain authorization from Congress before launching further military operations against Iran. Kaine and other supporters say the measure is not about Trump or even the presidency, but instead is an important reassertion of congressional power to declare war.

The measure will now be sent to Trump, who is expected to veto it. He has promised to veto the war powers resolution, warning that if his “hands were tied, Iran would have a field day.”

While tensions with Iran have abated since then, Rep. Eliot Engel (D-N.Y.), chairman of the House Foreign Affairs Committee, said the resolution clarifying Congress’s power to declare war is still important.

The resolution “sends a clear message that the American people don’t want war with Iran and that Congress has not authorized war with Iran,” Engel said.

“Congress doesn’t have to wait until the president alone decides to use military force again,″ Engel told House members during the floor debate on Wednesday. “It’s our responsibility to do something, because we know the tensions could flare up again at a moment’s notice. Iran has not been deterred as the administration promised.″

Meanwhile, the measure was criticized as “divisive and irresponsible” and based on a false premise by Rep. Michael McCaul (R-Texas), the top Republican on the Foreign Affairs Committee. “It orders the president to terminate hostilities against Iran. The problem is, for the other side, we are not engaged in hostilities in Iran,″ McCaul said.

If the U.S. military launches strikes in Iran, “I believe that the president would need to come before this body to ask for a new authorization” for the use of force, McCaul said. “But that is not what we are facing.″

The Trump administration has defended the killing of Soleimani, the head of the Islamic Revolutionary Guard Quds Force, with Secretary of State Mike Pompeo saying that it was the “right decision.”

In the weeks that followed Soleimani’s death, the House of Representatives passed two separate bills aimed at curbing President Trump’s war powers—one to block funding for any use of military force in or against Iran unless Congress declares war, and the other to repeal the 2002 Congressional Authorization for Use of Military Force against Iraq. The Senate chose to move forward with Kaine’s legislation.