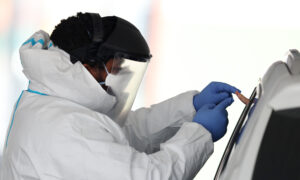 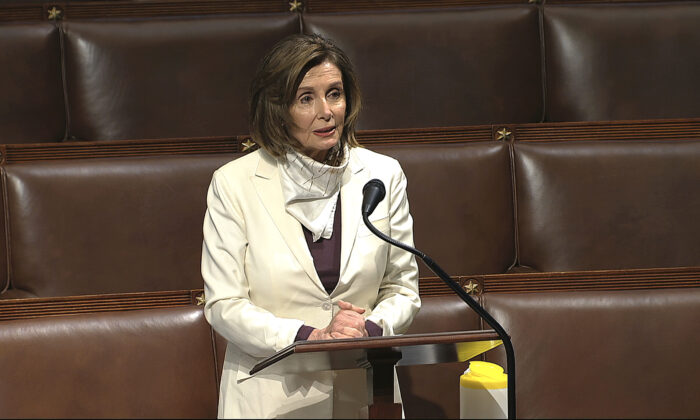 House Speaker Nancy Pelosi (D-Calif.) speaks on the floor of the House of Representatives at the U.S. Capitol in Washington, on April 23, 2020. (House Television via AP)
AMERICA

The House of Representatives on April 23 passed a stimulus bill with $484 billion in funding for the battle against the CCP virus and financial relief for American workers and businesses affected by shutdowns related to the pandemic.

The Senate had approved the bill two days earlier and the president has signaled his intent to sign it. The bill approved by the House on April 23 is the fourth such measure passed as part of the government’s response to the outbreak of COVID-19 and its impact on the economy. The three prior bills already amounted to the largest stimulus in U.S. history.

Only a handful of Republicans and Democrats had voted to oppose the bill by the time affirmative votes cleared the two-thirds threshold necessary to pass the bill.

“By providing $310 billion for PPP, this bill allow the program to reopen and more small business to secure capital and keep employees on payroll,” Rep. Nydia Velazquez (D-N.Y.) said the House floor on April 23.

Both Democrats and Republicans have expressed concerns about large companies receiving funding through the PPP. President Donald Trump said large companies shouldn’t be taking the money. Velazquez said more than 80 publicly traded companies received loans via the program, and a number of companies, including Shake Shack, Ruth’s Chris Steak House, and Sweetgreen, have already returned the loaned funds.

Treasury Secretary Steven Mnuchin has said that more than a million small businesses with less than 10 employees each received loans through the PPP. Trump had urged the House to pass the bill.

The measure also includes $60 billion for disaster relief loans and grants, $75 billion for hospitals and health care providers, and $25 billion for testing for the Chinese Communist Party (CCP) virus, commonly known as the coronavirus.

The $25 billion in funds for CCP virus testing will cover research, development, manufacture, purchasing, and administration of tests as well. The funds will be divided between states and localities, the Centers for Diseases Control and Prevention, and the National Institutes of Health, among others.

Companies and nonprofits that have fewer than 500 workers can apply for PPP loans of up to $10 million to cover two months of payroll along with other expenses. Under the deal, borrowers that retain workers and don’t cut wages will have most or all of their loans forgiven by the government.

The Treasury Department said last week that 1.6 million PPP loans had been approved. The program ran out of money a week prior to the House vote. The Senate moved quickly to replenish the funds, but passage of the bill was held up for days in both houses as Democrats and Republicans negotiated the details.

“This bill is 16 days too late,” Rep. Kevin Brady (R-Texas) said on the House floor on April 23. “It got held up for all sorts of extracurricular stuff and we should have come together. It was delayed. Real people lost their jobs as a result.”

The April 23 measure brings total rescue funding over the four measures, as measured by the cumulative deficit impact of spending proposals and tax cuts, to $2.4 trillion, according to the Congressional Budget Office.

Among the candidates for aid in the next bill is the U.S. Postal Service, which has more than 600,000 workers, but is getting clobbered by COVID-19-related revenue losses.

In a related matter, the House used a party-line 212–182 vote on April 23 to establish a special committee to oversee how the Trump administration spends the huge sums of money Congress is providing to battle the coronavirus. Republicans accused Democrats of playing politics with the crisis, but Democrats said Congress needs to keep an eye on the effort.