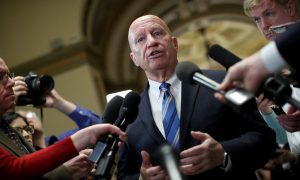 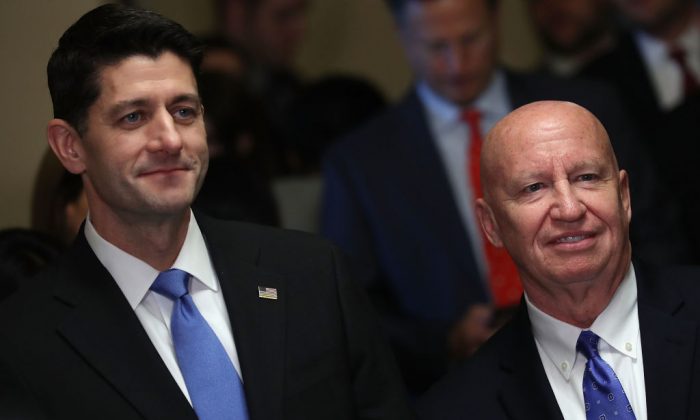 Speaker of the House Paul Ryan (R-WI) and House Ways and Means Committee Chairman Kevin Brady (R-TX) hold a news conference following passage of the Tax Cuts and Jobs Act in the Will Rogers Corridor at the U.S. Capitol in Washington, DC. on December 19, 2017. (Chip Somodevilla/Getty Images)
Politics

WASHINGTON—The House of Representatives passed the “Tax Cuts and Jobs Act,” on Dec. 19. by a vote of 227–203, with only Republicans voting for the measure. The House will have to do it all over again on the morning of Dec. 20, however.

Senate Democrats raised a point of order claiming a few provisions in the tax bill violated Senate rules, and the parliamentarian agreed. The House re-vote will be on the bill with those three provisions—including the name of the bill—changed.

For tax reform to become law, both houses of Congress have to approve the final bill and send it to the president for signature. The Senate is expected to vote on Tuesday evening.

If the bill passes the Congress, it will be the largest tax code overhaul since the Reagan years and the first major legislative victory of President Donald Trump.

April 15 next year would be “the last time you will file under this monstrous, broken tax code,” said House Ways and Means Chairman Kevin Brady at a press conference following the release of the tax bill on Dec. 15.

Here’s a rundown of what is in the final tax bill:

The bill keeps the seven individual tax brackets while reducing the rates on taxable income to:

The plan reduces the corporate tax rate from 35 percent to 21 percent, which is higher than the 20 percent included in the original House and Senate tax bills. The rate cut will take effect in 2018, rather than 2019, as the Senate bill initially proposed.

The plan allows all businesses to immediately write-off the full cost of new investments including equipment. It also eliminates the corporate alternative minimum tax (AMT).

3. Offers 20 percent deduction for pass-through entities applicable to the first $315,000 of joint income

This deduction is provided to all pass-through entities organized as S corporations, partnerships, LLCs, and sole proprietorships. For small businesses with income above $315,000, the bill generally provides a deduction for up to 20 percent on business profits. The provision reduces the effective marginal tax rate to no more than 29.6 percent. Under the existing tax code, pass-throughs are taxed at 39.6 percent.

To avoid individuals abusing the lower tax, the bill has strong safeguards so that wage income does not receive the lower marginal effective tax rates on business income.

The bill will enable deductions up to $10,000 and give taxpayers the option to choose among sales, income, and property taxes.

For graduate students, the final bill continues to exempt the value of reduced tuition from taxes. 529 savings accounts, which are currently used for college expenses, will now be available for expenses at K-12 private schools, including religious schools.

There will be no changes to 401(k)s and individual retirement accounts (IRAs). The bill also increases the exemptions amount from the alternative minimum tax to reduce the complexity of the tax code.

9. Keeps the estate tax (death tax) but doubles the threshold

In line with the Senate’s proposal, the final bill keeps the estate tax and doubles the threshold for the value of inheritance to $11.2 million. In addition, the bill continues and expands the deduction for charitable contributions.

10. Moves away from worldwide taxation system for corporations

The bill moves from a worldwide taxation system—which taxes income earned anywhere in the world—to a territorial system, only taxing income earned inside the home country.

The existing worldwide tax system double-taxes the foreign income of U.S. companies as soon as these earnings are repatriated. In other words, the U.S. companies have to pay U.S. tax on top of what they already pay in foreign countries.

By contrast, in a territorial tax system, the companies would be taxed on their U.S. income only and would be exempt from paying taxes on most or all foreign income. This system would make it easier for U.S. companies to compete internationally.

As a transition to the territorial system, there will be a one-time tax payable on profits U.S. multinationals have already accumulated overseas. According to media reports, the corporate repatriation rates would be 15.5 percent on cash and 8 percent on illiquid assets. These are higher than original rates proposed by the House and Senate.