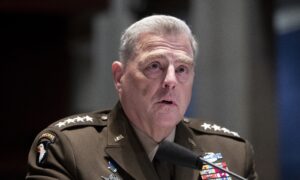 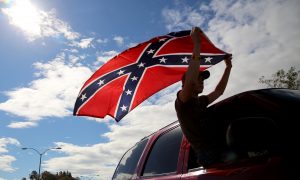 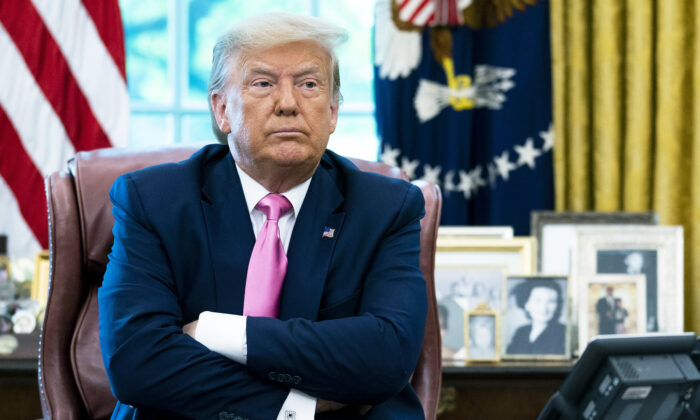 President Donald Trump talks to reporters while hosting Republican Congressional leaders and members of his cabinet in the Oval Office at the White House in Washington on July 20, 2020. (Doug Mills-Pool/Getty Images)
Politics

The House of Representatives on July 21 passed its version of the $740-billion National Defense Authorization Act (NDAA), despite the threat of a veto from President Donald Trump over the renaming of military assets named after Confederate leaders.

The annual defense policy bill was approved by the Democrat-led House on Tuesday in a 295-125 vote, paving the way for negotiations with the Senate on a compromise version of the NDAA, which Trump would then sign or veto. Of the 125 “no” votes, 43 were from Democrats.

The $740.5-billion NDAA also includes a ban on the Confederate flag on military property—including living quarters, vehicles, and clothing.

The White House earlier on Tuesday said in a statement (pdf) that the president would veto the crucial legislation that funds the military for the 2021 fiscal year if it required the Defense Department to strip the names of Confederate generals from U.S. military bases and facilities—an amendment proposed by Sen. Elizabeth Warren (D-Mass.).

The Pentagon would be required to rename bases and other military properties within a year under the version of the defense bill approved Tuesday.

In its announcement, the White House said the amendment is “part of a sustained effort to erase from the history of the nation those who do not meet an ever-shifting standard of conduct,” deploring a “left-wing cultural revolution.”

Many on the left say Confederate names and monuments represent a history of “white supremacy.”

The Trump administration also has “serious concerns” about certain provisions of the bill that “seek to micromanage aspects of the executive branch’s authority, impose highly prescriptive limitations on the use of funds for Afghanistan, and otherwise constrain the president’s authority to protect national security interests,” the statement said.

The Senate version of the bill is under consideration and will be debated this week. The Senate bill also includes a plan to change the names of bases such as Fort Bragg and Fort Benning, which honor men who fought against U.S. troops 155 years ago during the Civil War.

Trump on Sunday criticized efforts to rename military assets named for people “who served in the political or military leadership of any armed rebellion against the United States.”

Past efforts to rename military installations have stalled on the grounds that these places represent an American tradition.

Warren earlier this month argued that these names represent an “ugly” past and the names of “traitors” should not be honored.

“Those who complain that removing the names of traitors from these bases ignores history ought to learn some history themselves. These bases were not named in the years following the Civil War. No. They were named decades and decades later, during the Jim Crow era, to strengthen a movement that tried to glorify the Confederacy and reinforce white supremacy,” Warren argued.

Warren argued that the current political moment, after the death of George Floyd, a black man who died while in the custody of Minneapolis police, calls for “ending police brutality, once and for all. It is also about ending systemic racism.”

A Pentagon spokesman said he expected Congress and the White House would work out their differences. “They understand the importance of the NDAA, and we’re confident… the NDAA will be signed and implemented on time so that we can have a budget for our forces,” he said.