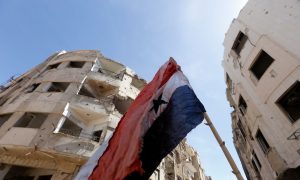 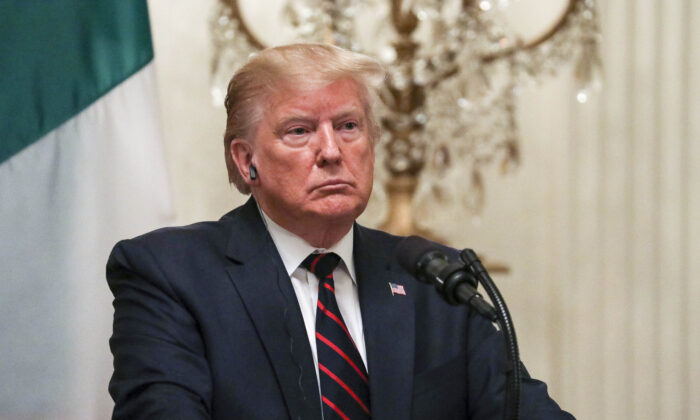 President Donald Trump at a press conference with Italy President Sergio Mattarella (not pictured) in the East Room of the White House in Washington on Oct. 16, 2019. (Charlotte Cuthbertson/The Epoch Times)
Politics

The House of Representatives passed a resolution on Wednesday, condemning President Donald Trump’s decision to withdraw American forces from Syria.

The resolution stated that the House was “opposing the decision to end certain United States efforts to prevent Turkish military operations against Syrian Kurdish forces in Northeast Syria.”

The resolution praised Kurds for fighting “courageously with the United States against the brutality of ISIS throughout Syria.” It said Turkey “has historically threatened, forcibly displaced, and killed Syrian Kurds.”

It noted the White House announced on Oct. 6 that U.S. forces would be leaving northern Syria. On Oct. 10, Turkey invaded Syria. Later that day, the White House said in a statement: “the United States does not endorse this attack and has made it clear to Turkey that this operation is a bad idea.”

Lawmakers also expressed concerns about the numerous captured ISIS fighters held in Syria as well as an estimated 70,000 women and children detained at displaced person camps in Syria.

Congress “calls on Turkish President Erdogan to immediately cease unilateral military action in Northeast Syria and to respect existing agreements relating to Syria” and “calls on the United States to continue supporting Syrian Kurdish communities through humanitarian support, including to those displaced or otherwise affected by ongoing violence in Syria,” according to the resolution.

Speaking before the resolution passed, Engel said, “The President gave Erdogan the green light to charge into Northern Syria—unleashing what has become a brutal campaign of violence against the Syrian Kurds.”

“The President gave Erdogan the green light to charge into Northern Syria—unleashing what has become a brutal campaign of violence against the Syrian Kurds.”

Speaking in the White House around the same time, Trump said he did not give the green light to Erdogan.

“We had virtually no soldiers there, just a tiny little group, and they would have been in harm’s way. You have a massive army on the other side of the border. But more importantly, I didn’t give him a green light.”

Trump said he sent a letter to Erdogan that was strongly worded. He said Turkey has wanted to go into Syria for years, and the two sides have been embroiled in fighting for even longer.

Trump said earlier this month that his decision was part of an effort to get out of “these ridiculous endless wars.” Earlier on Wednesday, he said what happened in Syria was between Turkey and Syria, not the United States, and said the Kurds would be fine.

Lawmakers in the House and Senate, meanwhile, were preparing legislation that would levy sanctions against Turkey. Cheney introduced a sanctions bill on Wednesday signed by more than 90 Republicans, and Engel and McCaul were preparing another bill.