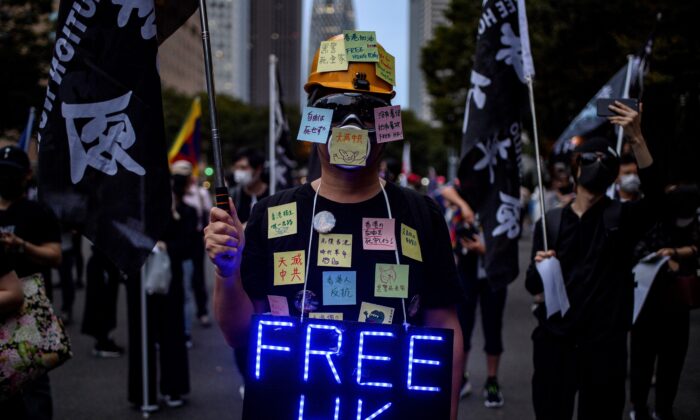 An activist dresses as a human "Lennon Wall" before an anti-China protest to mark the 71st anniversary of the founding of the People's Republic of China in Shinjuku district of Tokyo on October 3, 2020. (Philip Fong/AFP via Getty Images)
China-US News

The U.S. House of Representatives on Dec. 7 passed a bill that would provide temporary refuge for Hongkongers in the United States, as Beijing steps up its crackdown on pro-democracy protesters.

The House by voice vote passed the Hong Kong People’s Freedom and Choice Act of 2020 that would grant temporary protected status to Hong Kong residents currently in the United States who fear persecution if they were to return. It would also expedite the processing of refugee applications for Hongkongers fleeing persecution.

The passing of the legislation sends a message to Beijing, said lead sponsor Rep. Tom Malinowski (D-NJ) on the House floor, that, “if you crush Hong Kong, you will lose its best and brightest citizens, the people responsible for its vitality—for we will let them come to the United States, and contribute to our vitality.”

The Chinese communist regime has eroded Hong Kong’s freedoms since it imposed a draconian national security law in July, which empowers city authorities to punish people that Beijing deems to have committed broadly-worded offenses, such as secession and subversion of state power.

Since then, numerous pro-democracy activists and media figures have been arrested. Last week, prominent activist Joshua Wong was sentenced to 13.5 months in prison over his role in a protest near police headquarters last year, drawing international condemnation.

“Today as the CCP tightens its grip on Hong Kong, we must provide unwavering support for the democratic desires of the people of Hong Kong,” said Rep. French Hill (R-Ark.) on the House floor.

Under the proposed legislation, the United States would treat Hong Kong as separate from mainland China for the purpose of immigration visas for a period of five years. This position was reversed by the Trump administration earlier this year when it revoked Hong Kong’s special treatment under U.S. law in response to Beijing’s moves on the city.

The bill would also require the government to develop a strategy with allies to coordinate international efforts to provide refuge to Hongkongers fleeing persecution.

Similar legislation was introduced in the Senate in July.

Britain earlier this year offered a “bespoke” route to citizenship for Hong Kong residents holding the British National Overseas status (available to those born before Hong Kong’s transfer of sovereignty from Britain to China in 1997). Canada in November announced measures to remove some barriers for Hong Kong activists applying for asylum in the country.

Last week, Ted Hui, a pro-democracy activist and former lawmaker, fled to Britain to seek asylum after visiting Denmark under the guise of attending a climate change conference. Hui is charged in Hong Kong with criminal offenses relating to his participation in last year’s protests.

In August, 12 Hong Kong activists, aged between 16 and 33, were intercepted by Chinese police as they attempted to flee Hong Kong for Taiwan by boat. They are currently being held at a detention center in the mainland Chinese border city of Shenzhen.

Their plight has prompted international concern, as their families said the detainees were denied access to independent lawyers. They also suspected that Hong Kong authorities helped in China’s arrest.