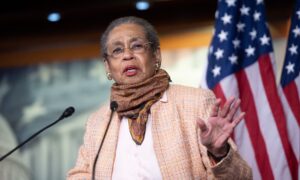 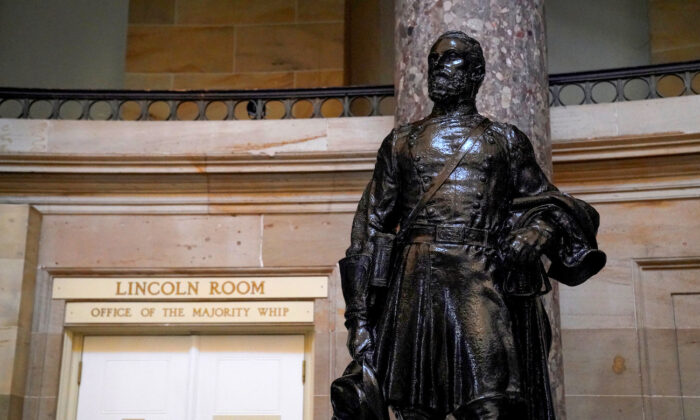 A statue of Confederate Joseph Wheeler is displayed in the U.S. Capitol in Washington, on July 23, 2020. (Erin Scott/Reuters)
Congress

The Democrat-led House of Representatives voted Tuesday to pass a bill seeking to remove confederate statues from the U.S. Capitol.

The proposed legislation seeks to remove statues of those who supported the Confederate army in the U.S. Civil War. It also seeks to replace a bust of former Chief Justice Roger Taney, who authored a key decision in 1857 supporting slavery, with one of Thurgood Marshall, the first black Supreme Court justice.

Taney had written the majority opinion of the 1857 Dred Scott decision that black people could not be American citizens and that slavery was not prohibited under the U.S. Constitution. The decision was later overturned by the 14th Amendment to the Constitution, which became official in 1868.

House Majority Leader Steny Hoyer (D-Md.), who introduced the latest bill, said late Tuesday that he hopes the Senate takes up the measure “without delay.”

“Today, the House took a stand against injustice and sent a message to the American people that symbols of slavery, segregation, and sedition are not welcome in the halls of Congress,” Hoyer said in a statement. “I am pleased to see our bill to remove hate pass in the House. Even though we cannot change our history, we can work to affirm the ideals that our country was built on: justice and equality for all.

“Symbols of slavery and segregation denigrate our Capitol and have no place here. Individuals who worked to enshrine or perpetuate the bondage of African Americans, or prevent them from achieving full and equal rights, are not worthy of being honored in our country.”

The move marks the second year in a row that the lower congressional chamber passed a measure to remove from the Capitol building statues of those who served or supported the Confederacy. The Senate, which was controlled by Republicans in 2020, had blocked the bill, which was introduced amid protests across the country calling for racial justice following the death of George Floyd.

Democrats now hold a narrow majority in the Senate, which allows them to force a vote on the bill. It will require 60 votes to pass, which means 10 Republican senators would need to support it.

The Capitol complex contains two statues from each of 50 U.S. states throughout its various quarters, as part of the National Statuary Hall Collection. The statues can be switched out of the collection if approved by the relevant state’s legislature and governor.

Congress cannot remove the statues but H.R. 3005 would, if passed, enable the statues to be moved away from any area of the Capitol accessible to the public within 120 days after the measure is enacted. The statues would be returned to the state that provided it, if the state agrees to cover costs for transportation.

House Speaker Nancy Pelosi (D-Calif.) asked, “How can we expect to end the scourge of racism … when we allow the worst perpetrators of that racism to be lauded in the halls of Congress?”

Opponents said it would be wrong to dictate to individual U.S. states whom they can honor by sending statues to the Capitol. Rep. Mo Brooks (R-Ala.) said the bill was an example of “cancel culture and historical revisionism” by “elitists who claim they know more than regular citizens.”

In 2020, the state of Virginia removed a statue of Confederate general Robert E. Lee from the Capitol, replacing it with a statue of civil rights leader Barbara Johns.