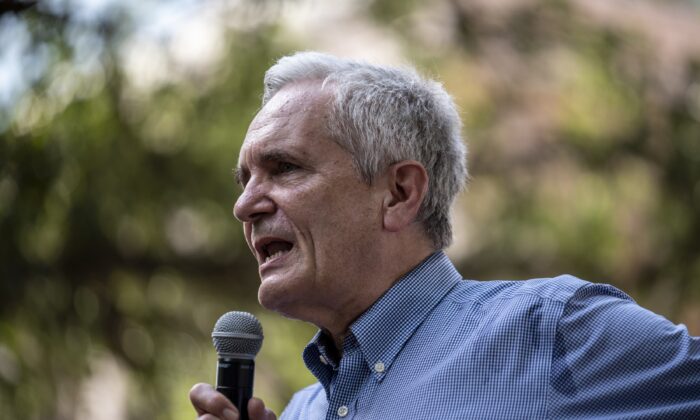 The House of Representatives on March 9 overwhelmingly approved a proposal that would ban Russian oil imports.

The vote on H.R. 6968, the Suspending Energy Imports from Russia Act, was 414–17, with many members from both parties voting yes.

In addition to prohibiting such imports for 45 days, it would instruct the U.S. trade representative to encourage World Trade Organization members to suspend trading with Russia and express support for sanctioning Russian officials for human rights abuses.

“In the face of death and destruction … the Ukrainians are showing the world the true meaning of courage. We can respond tonight by taking another step to isolate Russia from the world economy,” Rep. Lloyd Doggett (D-Texas), the bill’s sponsor, said on the House floor before the vote.

Lawmakers said the bill banning imports from Russia as a way to signal displeasure with the country’s invasion of Ukraine is crucial even if it means gas prices, already at record highs, would rise further.

“It may cost more to fill your tank, but we must work to stop Putin’s tanks from crushing families and freedom,” Doggett added, referring to Russian President Vladimir Putin.

Republicans largely said they support the legislation, but want the Biden administration to address its block on new oil and gas permits for federal lands and other actions the lawmakers believe should be reversed.

“The ban on Russian oil alone is worth our support. Ukraine is waiting. But after this bill, I urge Congress to do more to revoke Russia’s special trade status and unleash America’s own ability to be energy independent,” Rep. Kevin Brady (R-Texas) said.

Domestic producers say Biden should take action to back them, including speeding permit approvals and restarting canceled pipeline projects.

Even as the administration swears off Russian products, officials are in touch with Iranian and Venezuelan counterparts about getting oil, a point of contention with the opposing party.

Rep. Andy Biggs (R-Ariz.), one of the 17 votes against the bill, said in a video statement that he supports banning Russian oil and the sanctions piece, but he wanted the moves to happen in conjunction with “American energy independence.”

The timing for the Senate to take up the bill is unclear.

A dozen senators on March 3 introduced a measure that would ban Russian products such as crude oil.

That bill “supports Ukraine by blunting one of Putin’s advantages: Russian energy production,” Sen. Mark Kelly (D-Ariz.), one of the sponsors, said in a statement at the time.