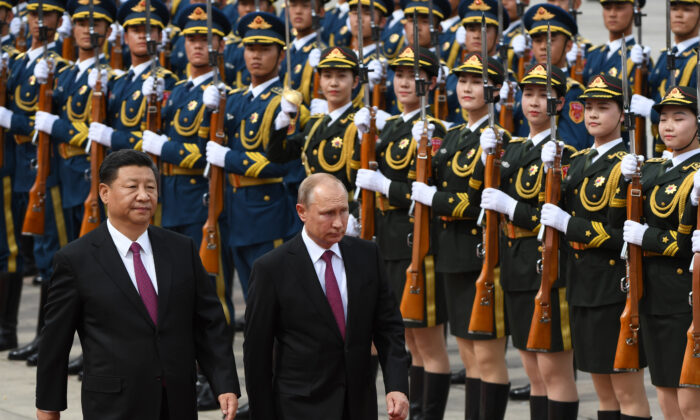 The House passed legislation on April 27 that would require the State Department to submit ongoing reports to Congress documenting China’s support of the ongoing Russian invasion of Ukraine.

H.R. 7314, referred to as the “Assessing Xi’s Interference and Subversion Act” or, more simply, the “AXIS Act,” will now go to the Senate for consideration.

The text of the legislation states that China’s communist regime has engaged in a pro-Russia propaganda campaign that “make it culpable in whitewashing Russia’s war crimes, which include the indiscriminate killing of countless Ukrainian men, women, and children.”

Russia is currently being investigated for war crimes and crimes against humanity in Ukraine. The Chinese Communist Party (CCP), meanwhile, has been accused by American leadership of tacitly supporting the alleged crimes, and called out by international leadership for its refusal to condemn Russia.

Rep. Andy Barr (R-Ky.), who sponsored the bill, said that the legislation was necessary to inform the public and Congress of the full extent of the Sino-Russian relationship.

“The alliance between the Chinese Communist Party and the Russian Kremlin is the new Axis of evil that threatens the United States and the rules-based international order,” Barr said in a statement. “We need a full report on the extent of the collaboration between Russia and China to inform the public and enable lawmakers to begin positioning the U.S. to overcome this geopolitical challenge.”

The United States has accused the CCP of tacitly enabling Russia’s war in Ukraine. Documents leaked to the press from within the U.S. government suggested that the CCP knew about the invasion ahead of time and that Chinese officials requested Russia postpone the war until the end of the Beijing Olympics. Other reports suggested that China was mulling a Russian plea for financial and military assistance with its war effort.

A report from within Ukraine, potentially created with the help of an unknown partner nation, said that Chinese state-backed hackers conducted a large cyber attack on critical civilian and military infrastructure in Ukraine the day before the war started.

CCP leader Xi Jinping and Russian leader Vladimir Putin announced a “no limits” partnership on Feb. 4, and have repeatedly reaffirmed their commitment to one another in the face of international condemnation and outrage. The CCP also refused to engage in international efforts to condemn Russia’s aggression and stated that multilateral financial sanctions against Putin and Russia were illegitimate.

The deepening partnership between the CCP and the Kremlin has alarmed Western strategists, with one defense expert claiming that China would continue to support Russia even if it deployed a tactical nuclear weapon in Ukraine.

As such, many in Washington consider the Chinese communist regime to be a willing partner in Russia’s war.

“The Chinese Communist Party has proven it is not willing or capable of acting as a constructive partner in Russia’s unprovoked attack on Ukraine,” Rep. Michael McCaul (R-Texas) said in an April 28 statement. “Rather, they are complicit.”