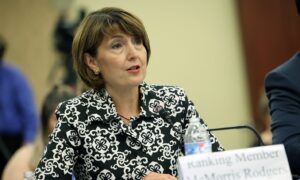 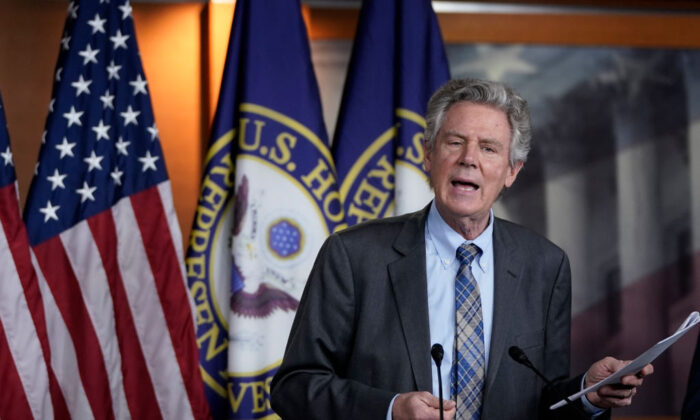 Rep. Frank Pallone (D-N.J.) speaks during a news conference at the U.S. Capitol in Washington on May 27, 2020. (Drew Angerer/Getty Images)
Congress

House Energy and Commerce Committee Democrats defeated multiple Republican amendments Monday during the first day of marking up of President Joe Biden’s $3.5 trillion “Build Back Better” spending program that is the most massive package of reforms in American government and society since the New Deal.

Most of the Republican amendments on the first of what could be three days of work for the panel focused on eliminating or at least limiting the economic impact of the Biden program’s new natural gas tax.

The legislation being marked up—that is, drafting the final version of the bill that will go to the House floor for the final debate and voting—will be thousands of pages long when it is completed.

With a $3.5 trillion price tag, the bill will likely be the most expensive ever considered by Congress. And given the massive number of grants, new programs and taxes, expansions of existing programs, and loan guarantees, virtually every sector of American daily life will be affected if the proposal becomes law.

The extraordinarily broad scope of the proposal to makes it difficult for moderate colleagues to vote against it, in much the same way as happens on end-of-year Continuing Resolutions (CR) to keep the government open while Congress negotiates new spending levels.

Those end-of-the-year measures fund the whole government, so it is all but impossible for senators and representatives to oppose them because doing so subjects them to criticism from advocates for every program that could suffer if the resolution fails and the government is forced to shut down.

House members face much the same problem with the Biden spending plan, according to Brian Darling, former legal counsel to Sen. Rand Paul (R-Ky.) and a veteran legislative strategist.

“The parameters of the so-called ‘Build Back Better’ plan look like a laundry list of items that are intended to bully moderate Democrats into supporting the massive package,” Darling told The Epoch Times. “Moderate Democrats are going to claim they are opposed to the more radical elements of this package, but then they will vote for it for fear of taking down the whole package.”

“This is a classic case of leadership putting forth a controversial package and daring dissenting members of their own caucus to vote against it,” he added.

Committee Republicans filed a series of amendments aiming to kill or substantially revise the proposal’s new levy, which would be calculated using a complicated formula based on Environmental Protection Agency (EPA) classifications of Greenhouse Gases.

“The natural gas tax will impact our entire economy by making it more expensive to heat homes, cook, eat, and manufacture thousands of products, from Personal Protective Equipment (PPE) to medicines to solar panels,” Ranking Minority Member Rep. Cathy McMorris-Rodgers (R-Wash.) told the committee on introducing her amendment to strike new levy from the bill.

“This new natural gas tax is a punitive tax designed to artificially raise the price of natural gas to discourage job-creating investments in fossil fuels and force a radical transformation of American life,” McMorris-Rodgers said.

The new levy “will generate significant costs for every American household and eliminate a substantial number of jobs across our entire economy,” she added. “Based on an economy-wide analysis, the natural gas tax could reduce the U.S. Gross Domestic Product (GDP) by $9 billion and result in 90,000 jobs lost.”

Democrats argued the new levy is modest, would be assessed only against energy producers, and would only apply to leaks of methane, which come at every stage of energy production.

“We are all dealing with the devastating consequences of a rapidly warming planet. Rep. Kathy Castor (D-Fla.). “Methane over 20 years, traps more than 80 times as much heat as Carbon Dioxide (CO2). It is a major contributor to the climate crisis because methane escapes at every point of the oil and gas production.”

Castor said “these leaks undermine any benefits that fracking natural gas has, compared to coal. Methane pollution in 2020 represented the largest annual increase recorded since systemic measurements began in 1983.”

Energy industry analysts argue that methane leakage is already being eliminated by oil and gas producers.

“The current leakage rate for petroleum and natural gas systems is estimated at about 1.2 percent, according to the U.S. EPA,” Energy in Depth, a research project of the Independent Petroleum Producers of America, states on its website. “From 1990 to 2017, methane emissions from petroleum and natural gas systems declined by 31.9 million metric tons of carbon dioxide (CO2) equivalent, or 14 percent. Over that same period, natural gas production increased by 51 percent, while oil production increased by 80 percent.”

Dan Kish, Senior Vice President of the Energy Institute for Research, told The Epoch Times Monday that the Biden proposal “is nothing but a tax on Natural Gas, which has already doubled in price since the beginning of this year. Americans who heat, cook, or use anything made from plastic or consume food made with fertilizer will feel the brunt of this tax on their lives. And despite claims any tax increases wouldn’t affect lower income Americans, this will hit them the worst. It is a tax, and it is a cruel tax.”

The McMorris-Rodgers amendment was defeated on a party line vote of 32 Democrats opposing and 26 Republicans favoring it. Other Republican amendments were defeated on similar votes, including one that would have specified the new levy does not apply to methane emissions from farm animals.