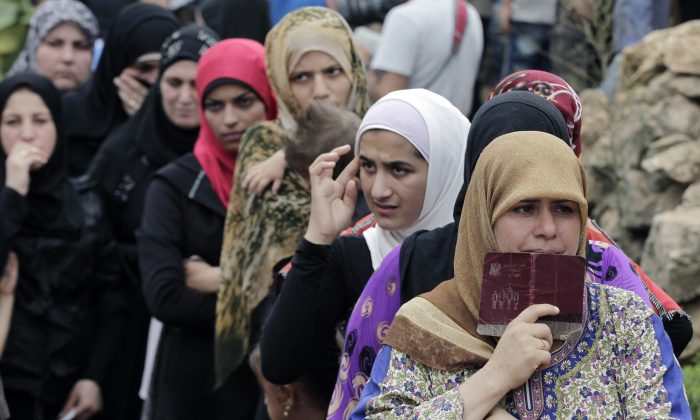 Syrian women wait in line to receive aid from an Islamic relief agency at a refugee camp in the town of Ketermaya, north of the port city of Sidon, Lebanon on Sept. 7, 2015 file photo. (AP Photo/Bilal Hussein)
Politics

WASHINGTON—Republicans embarrassed President Barack Obama by winning veto-proof House approval of legislation blocking Syrian and Iraqi refugees from the U.S., but from here the effort may take a different turn in Congress.

Six days after the Paris attacks, the House voted 289-137 Thursday to essentially bar refugees from the two war-ravaged countries while tighter entry restrictions are imposed. In a rebuke to Obama that even an eleventh-hour visit to the Capitol by top administration officials could not avert, 47 Democrats — including many facing tight 2016 re-elections — joined the GOP, yielding the two-thirds margin needed to override vetoes.

Though Republicans felt they’d found a soft spot for Democrats no longer constrained to back a lame-duck president, Congress prepared to leave town until after Thanksgiving and its next moves were uncertain.

Senate Majority Leader Mitch McConnell, R-Ky., slotted the House bill for possible Senate consideration and said pausing the refugee process would be “the most reasonable and balanced thing for the administration to do.” His top deputy, Sen. John Cornyn, R-Texas, said he’d like the Senate to ship the House measure to Obama — who has promised a veto.

Whether that bill could reach the White House remained unclear. At least six Democrats would have to join Republicans to push it through the Senate and 13 Democrats would be needed for a veto-proof tally — which the chamber’s top Democrat painted as far-fetched.

One top Senate GOP aide said it was unlikely that chamber would consider the House bill. The aide said senators were more concerned about potential weak spots in a program that lets foreigners enter the U.S. without visas from 38 countries for short stays.

Senate Democrats also expressed interest in tightening the so-called visa waiver program. One proposal by Sen. Dianne Feinstein, D-Calif., and others included a bar against foreigners entering the U.S. without visas if they’ve visited Syria or Iraq in the past five years.

The Islamic State, the terrorist group that has claimed credit for the Paris attacks, controls parts of Iraq and Syria and has prompted people to flee both countries. With polls showing many Americans wary of admitting those refugees, members of both parties were using the issue for campaign purposes.

“Our position on this piece of legislation has not changed,” Earnest said. He did say White House staff members are talking with members of Congress on reforms to the visa waiver program, calling those discussions “productive.”

“This is an area where additional scrutiny and reform could be useful in enhancing the home security of the United States,” he said.

The volatile issue is causing divisions on Capitol Hill, even among members of the same party.

Rep. Alan Grayson, D-Fla., attacked his rival for a Senate seat, Rep. Patrick Murphy, D-Fla., for supporting the GOP bill. His fundraising email accused Murphy of a “fear of orphans and widows with brown skin,” a reference to the status and appearance of many Syrian and Iraqi refugees.

Strict curbs like those the House approved could still complicate a congressional effort to prevent a pre-Christmas federal shutdown.

Conservatives remained eager to attach restrictions on Syrian and Iraqi refugees to a spending bill lawmakers must pass by Dec. 11 or face a partial government shutdown.

Rep. Brian Babin, R-Texas, had compiled signatures from 68 House Republicans on a letter asking House GOP leaders to use that spending bill to block federal funds for Middle Eastern or North African refugees unless screening ensures that such programs couldn’t be “co-opted by would-be terrorists.”

It wasn’t clear, though, that the fight would grow into the kind of battle waged often between conservatives and former Speaker John Boehner, R-Ohio, who left Congress last month.

The letter couched the proposal as a request, not a demand. McConnell has said there will be no government shutdown as the 2016 elections approach. And though new House Speaker Paul Ryan, R-Wis., hasn’t ruled out any approach, it seemed unlikely he would relish escalating the fight into a holiday-season shutdown battle with the president.

The House bill would require FBI background checks on Syrian and Iraqi refugees and require three top federal officials to certify that each refugee is safe.

Administration officials and many Democrats argued that the current vetting process was already tough, and accused Republicans of campaign-season fear-mongering. They said the screening involves multiple federal agencies and usually takes 18-to-24 months, making it an unlikely pathway for terrorists to use.

The administration plans to accept about 10,000 Syrian refugees in addition to the over 2,000 who have settled here in recent years.