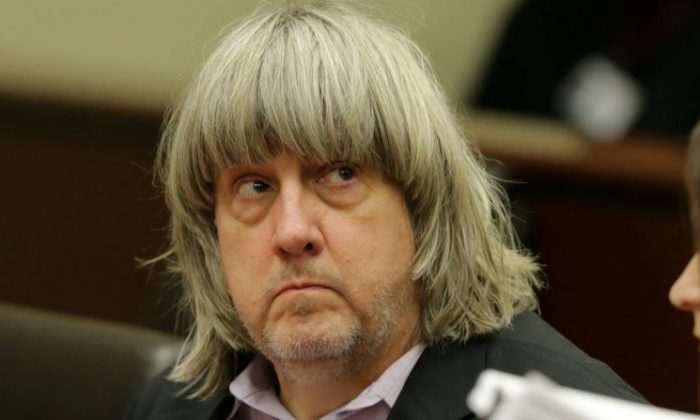 David Turpin appears in court for his arraignment in Riverside, Calif. on Jan. 18, 2018. (Reuters/Terry Pierson/Pool)
US News

“Horror house” dad, David Turpin, allegedly kidnapped his wife when she was 16 so that they could elope, family members reveal in a new report.

According to DailyMailTV, Turpin, 56, persuaded school employees at Princeton, West Virginia to release tenth-grader Louise Robinette to him without letting her parents know more than 30 years ago.

The pair sped across the country to Texas before they were caught by police and brought home.

“My mom allowed Louise to date David secretly because she loved him and he was from a Christian family and she trusted Louise,” said Teresa.

“But she was doing it behind my dad’s back — he wasn’t aware that they were dating — and then one day, David went into the high school and they let him sign Louise out of school and they ran away. He had his car and they drove,” she added.

Eventually, Louise’s father Wayne Robinette, who worked as a preacher, found out his daughter was missing and officials at Princeton Senior High School were forced to admit David had signed her out of school.

“They made it all the way to Texas before the police stopped them,” Teresa told DailyMailTV.

To the family’s surprise, Louise’s dad allowed the couple to marry after they returned to Princeton.

“What was crazy was that after that my mom and dad sort of switched roles,” she told the news website. “My mom, who had let them date, ended up being the one telling the police they had to send her home. She wanted her home right now, but my dad said, ‘No, she has made her choice, she should go off and live her life.'”

“He was angry at my mom for letting them date. He was so upset. He told her it was all her fault. He got on the phone and told Louise, ‘This is the life you want, you’re now an adult, I love you and I’ll always be your daddy, but now you can take care of yourself. If this is what you want, you go for it.'”

“So he let her marry him. They came back to Princeton and had a small intimate church wedding, just the two families. Then they went back to Texas to start their lives together,” she recalled.

Louise’s elopement and teenage wedding caused a rift in the family and her parents eventually divorced, reported DailyMailTV.

David and Louise Turpin have been accused neglecting and torturing their 13 children. It’s been alleged that they starved their children, chained them to furniture, beat them, and wouldn’t allow them to use the bathroom. Some of the children didn’t understand the concept of medicine or a police officer.

The pair were both charged with 12 counts of torture, seven counts of abuse of a dependent adult, six counts of child abuse or neglect and 12 counts of false imprisonment. David was also charged with a lewd act against a child under 14, reported the New York Post.

They could face decades in prison if they’re convicted.

“I hope they suffer as much, if not more, than those kids suffered,” Teresa told the news website. “I hope they torture my sister for the rest of her life.”

“I have four siblings now instead of five,” she added. “She is off my family tree, she is dead to me. I couldn’t care less about speaking to Louise ever again.”

“I think they should get life. That’s not just spur-of-the-moment anger, I’m not changing that view,” Louise’s half-brother Billy Lambert told DailyMailTV.

The Turpins pleaded not guilty to the charges in their court hearing last week. Their next court date is Feb. 23.