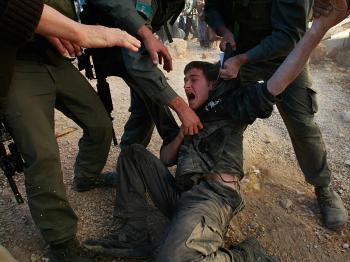 The decision to forcibly evacuate the dwelling was reached after negotiations with the besieging settlers ceased to make headway. A number of hard-line settles refused to leave the building, despite a ruling by the Israeli Supreme Court ordering the evacuation.

Some people were surprised by the decision to use force; many people believed that the government would wait until upcoming elections in February before choosing such a controversial course of action.

IDF troops were able to clear the building within an hour. A few protesters were slightly injured in the process.

The IDF sealed off the area as soon as the house was empty, but clashes between Palestinians and Jewish settlers broke out in the area around the house. Gunshots could be heard.

Jewish settlers claimed that they had bought the house legally from its Palestinian owners through a third party. The Palestinian who claims to be the legal owner denies that the house was ever sold.

After an appeal was made to the Israeli Supreme Court on behalf of the Palestinian, the Court ruled the house must be evacuated until the dispute was settled. After the ruling was announced, many right-wing, religious activists swarmed to the house to prevent it from being evacuated.

Many feared that this might spark bloodshed and even a civil war in Israel. In other such evictions, like the eviction of the unauthorized outpost in Amona, many citizens and security personnel were injured, and the incident continued to ripple through Israeli society for a long time afterwards.