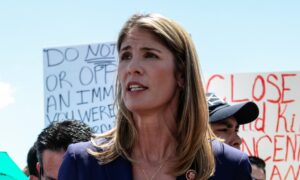 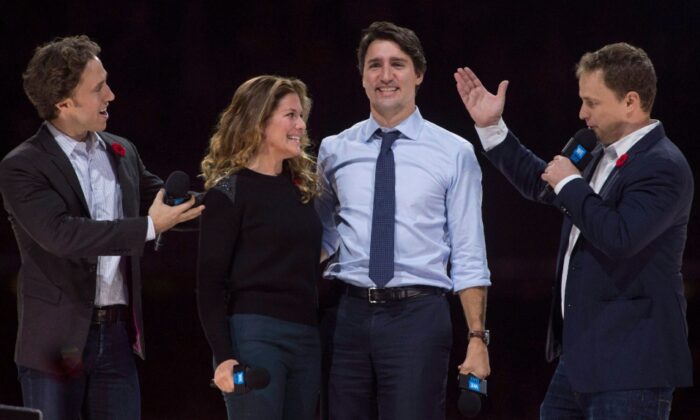 Co-founders Craig (L) and Marc Kielburger introduce Prime Minister Justin Trudeau and his wife Sophie Gregoire-Trudeau as they appear at the WE Day celebrations in Ottawa on November 10, 2015. (The Canadian Press /Adrian Wyld)
Canada

OTTAWA—The House of Commons ethics committee is making a third attempt at examining conflicts of interest in the government’s response to the COVID-19 pandemic, after two tries to probe Prime Minister Justin Trudeau’s relationship with WE Charity each failed by one vote.

Monday, the committee started debating a motion from NDP MP Charlie Angus to study possible conflicts of interest and lobbying violations in relation to pandemic spending—and specifically the deal with WE Charity to manage a student volunteering program worth hundreds of millions of dollars.

“We have been over a month debating how we’re going to get to work and we have actually gotten to work,” Angus said.

“We were victims of a communications problem,” Bloc MP Marie−Hélène Gaudreau said.

She proposed a second motion Monday, to study Trudeau’s and his wife Sophie Grégoire Trudeau’s speaking contracts since he was elected to Parliament in October 2008.

That failed on a 4-5 vote, with Angus abstaining. If he had voted with Conservatives on the committee in favour of the motion, the committee’s chair, Conservative David Sweet, would have broken the tie.

Then came the third motion, from Angus, to look at conflicts of interest more broadly.

Gaudreau proposed an amendment to add a look at the contracts for speeches by Trudeau and his wife, which Angus backed.

The committee would invite representatives of the Trudeau’s speaking agency to testify about all files related to speeches organized, since October 14, 2008 for Trudeau and his wife, and will demand copies of all the relevant paperwork.

“We had begun the WE Charity study and we never finished it,” Angus said. “If my colleagues are willing to work with me, we can get this motion passed and get down to business and get a report to Parliament.”

The federal ethics commissioner has already rejected a request from the Conservatives that he probe Silver’s work for mortgage finance company MCAP on those files, saying there’s no factual basis for such an investigation.

Angus also wants the committee to study Palantir Technologies Canada’s relationship with the government regarding a breach of Conflict of Interest Act by its president and former Canadian ambassador to the United States David MacNaughton.

Ethics commissioner Mario Dion has found that MacNaughton violated ethics rules in work on Palantir’s behalf, though no contracts for the firm resulted.

The committee meeting was adjourned to Tuesday to continue debating Angus’s motion.