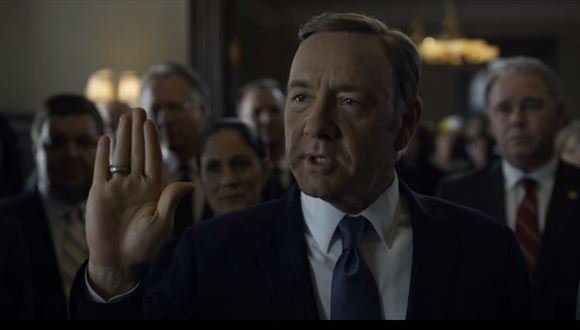 House of Cards season 2 has a release date of February 14, 2014, and Netflix has released a two-minute trailer that previews the season. The preview trailer includes some potential spoilers.

Some of the action in the trailer:

But things start getting tense when some of the people linked to him try to convince the president to change his mind, like Raymond Tusk.

“I want him obliterated,” said Underwood tells his wife, Claire.

“More than that, let’s make him suffer,” she says.

Underwood later says that “we have to hit hard and fast.

It appears that someone gets murdered, though it’s not clear who.

Journalist Zoe Barnes at one point in the trailer asks Underwood if she helped the murder happen.

The official description of the episode is:

“Francis and Claire Underwood continue their ruthless rise to power as threats mount on all fronts. Zoe Barnes, an up-and-coming reporter and Francis’s former paramour, is inching closer to the truth about his crimes.

“President Walker’s billionaire confidante Raymond Tusk demands that Francis reciprocate political favors or face retribution. And Claire must confront the increasing glare of the spotlight as it eats away at her and Francis’s once private existence. The Underwood’s must overcome these dangers — past and present — to avoid losing everything, regardless of collateral damage they leave in their wake.”

At this point, it’s unclear whether there will be a third season of “House of Cards.” The second season will have 13 episodes.