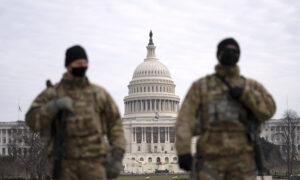 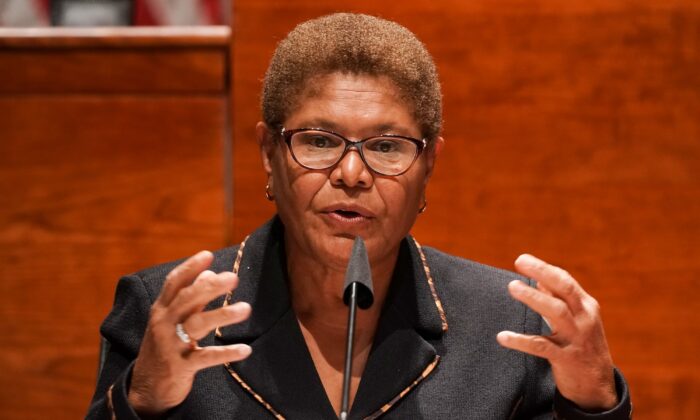 Rep. Karen Bass (D-Calif.) gives an opening statement during a markup on H.R. 7120, the Justice in Policing Act of 2020, on Capitol Hill in Washington on June 17, 2020. (Greg Nash/Pool/AFP via Getty Images)
Congress

The House of Representatives late Wednesday narrowly passed a bill that would ban controversial police tactics such as chokeholds and no-knock warrants, and would establish guidelines for police departments nationwide.

The George Floyd Justice in Policing Act was passed in a 220-212 vote a day ahead of schedule. The vote was moved a day earlier after the U.S. Capitol Police said that it had learned of a possible March 4 threat against members of Congress and the Capitol complex by “an identified militia group.”

The sweeping legislation now heads to the Senate where Democrats will have to sway at least 10 Republicans in order for it to succeed.

The sole Republican to initially vote in favor of the wide-ranging bill, Rep. Lance Gooden (R-Texas), said in a now-deleted Twitter post late Wednesday that he had accidentally cast the wrong ballot, the Hill reported.

“I accidentally pressed the wrong voting button and realized it too late. I have changed the official record to reflect my opposition to the partisan George Floyd Policing Act,” Gooden said, according to the news outlet.

“Of course I wouldn’t support the radical left’s Anti-Police Act,” he later wrote. “I have changed the official record to reflect my opposition!”

A similar version of the bill was first approved last August, but stalled in the Republican-controlled Senate. It was named in honor of George Floyd, whose death in Minnesota last Memorial Day sparked weeks of protests and riots nationwide.

Alongside a ban of controversial police tactics, it would prohibit “qualified immunity” for law enforcement and create national standards for policing in a bid to bolster accountability.

“Never again should an unarmed individual be murdered or brutalized by someone who is supposed to serve and protect them,” she said in a statement. “Never again should the world be subject to witnessing what we saw happen to George Floyd in the streets in Minnesota.”

Critics of the bill say it would make communities less safe, and endanger the lives of law enforcement officers.

The Biden administration in a statement earlier this week encouraged the House to vote in favor of the legislation.

“To make our communities safe, we must begin by rebuilding trust between law enforcement and the people they are entrusted to serve and protect,” the administration said. “We cannot rebuild that trust if we do not hold police officers accountable for abuses of power and tackle systemic misconduct—and systemic racism—in police departments.”

Derek Chauvin, the former police charged with second-degree murder and manslaughter charges in Floyd’s death, is set to begin his trial on March 8 in Minneapolis.