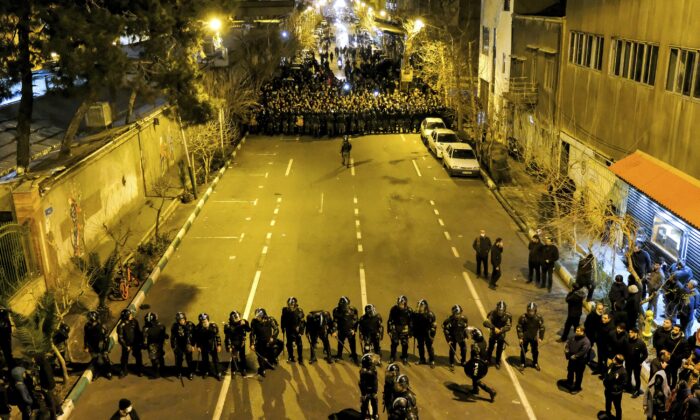 A resolution in support of the protesters in Iran was unveiled by House Minority Leader Kevin McCarthy (R-Calif.) late Monday.

The resolution will be brought to the full House for a vote as soon as this week, McCarthy said. “The people of the United States support freedom and democracy, and we will always stand beside those who seek it,” he said in a statement.

The resolution condemns the government of Iran for killing hundreds of protesters last year when they protested the country’s leadership.

It also noted that the government admitted shooting down a Ukrainian airline days after initially saying it had not shot it down. All 176 people on board, including dozens of Iranians and Canadians, were killed.

The resolution then notes that Iran arrested the British Ambassador to Iran after he attended a vigil for the victims of the downed flight. He was released hours later.

On Jan. 11, protesters across Iran gathered to denounce the country’s leaders, angry that Iran’s military shot down the plane. Protesters tore down posters of General Qassem Soleimani, who was recently killed by a U.S. airstrike, and chanted slogans including “clerics get lost!”

Video footage circulating online appeared to show Iranian security forces firing at protesters, and one video showed a woman being carried away leaving a trail of blood on the ground as people shouted that she was shot.

The House of Representatives, the resolution states, “condemns the government of Iran for killing approximately 1,500 Iranian citizens who were protesting their government” and “for shooting down Ukraine International Airlines Flight 752” and “for repeatedly lying to its people and to the world about its responsibility for the downing of” the plane.

The people of the United States support freedom and democracy, and we will always stand beside those who seek it.

Here is the full text of my resolution supporting the protestors in Iran. I expect the full House to vote on it this week. pic.twitter.com/nFk25Gjj4P

“I hope Speaker Pelosi will reconsider her confusion from Sunday’s show and decide to cosponsor this resolution and make it truly bipartisan,” he said.

House Speaker Nancy Pelosi (D-Calif.), asked about whether she supported the protesters on ABC’s “This Week,” responded: “The protesters are protesting, as I understand it, this brand of protesters, about the fact that that plane went down. And many students were on that plane. And these are largely students in the street.”

“Yes. Well, whatever it is. But the fact is this, there were protesters in the streets before against the regime. After the taking out of Soleimani, there were protesters in the street, joined together, as you know, against us. That wasn’t good. Taking down this plane is a terrible, terrible tragedy. And they should be held accountable for letting commercial flights go at a time that was so, so dangerous,” she said.

“But there are different reasons why people are in the street. Of course we would love to see the aspirations of the people of Iran realized with a better situation there, but” we shouldn’t escalate the situation unless “every other remedy” is exhausted, she said.