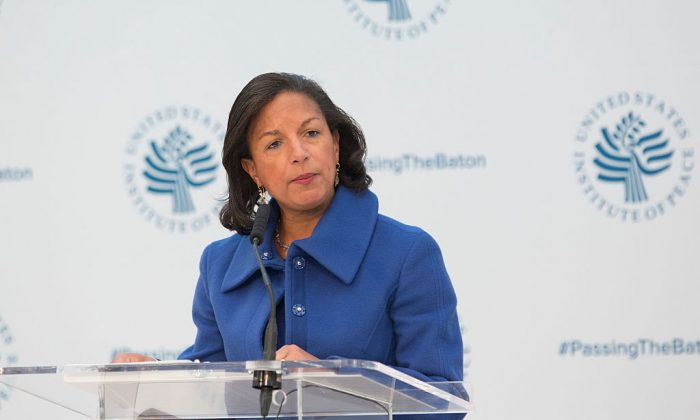 Ambassador Susan Rice, National Security Advisor speaks during a conference on the transition of the US Presidency from Barack Obama to Donald Trump at the US Institute Of Peace in Washington on Jan. 10, 2017. (CHRIS KLEPONIS/AFP/Getty Images)
Politics

The House Intelligence Committee is looking for answers regarding the Obama administration’s spying on and unmasking of the names of Americans, including members of President Donald Trump’s transition team. On May 31, the committee issued three subpoenas seeking information on unmasking requests made by former national security adviser Susan Rice, former CIA Director John Brennan, and former U.N. Ambassador Samantha Power.

The subpoenas were not sent directly to Rice, Brennan, or Power, and instead went to the NSA, CIA, and FBI, House Intelligence Committee Chairman Devin Nunes told The Daily Beast on June 5.

Nunes said the subpoenas are requests to the agencies on all three people named on “the unmasking they have done, that they did, from time period of 2016, the entire year, leading up to Jan. 20 of this year.”

When asked if additional Obama officials beyond Rice, Brennan, and Power were suspected of excessive unmaskings, Nunes said: “This is only the beginning. There are many more officials that we have concerns about abusing the intelligence programs.”

Rice was asked on May 3 to testify before a Senate Judiciary subcommittee, but she declined.

The testimonies are related to the government investigations into whether Russia interfered with the 2016 presidential elections, and into the Obama administration’s use of surveillance on the Trump team and others.