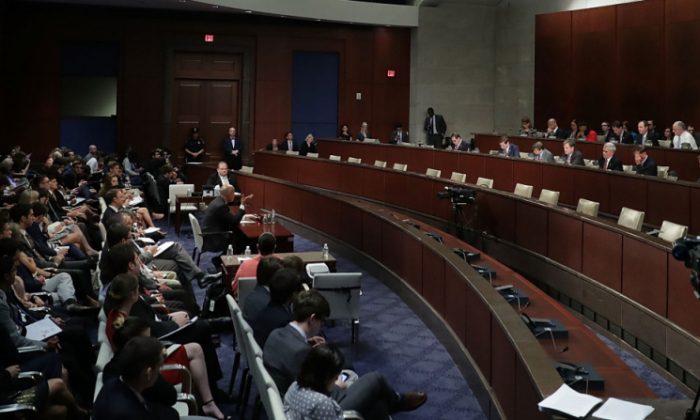 The House Intelligence Committee voted to officially complete its Russia investigation on Thursday and concluded that there is no evidence of collusion between the Trump campaign and Russia.

The committee began investigating allegations of Russian meddling in the U.S. elections more than 14 months ago. Since then, the members have interviewed 73 witnesses and obtained more than 300,000 documents.

A final report on the findings is due to be reviewed by intelligence agencies so sensitive information can be redacted before it is made available to the public. Meanwhile, members released a preliminary summary of the findings.

The summary shows that in addition to the key finding that there is no evidence of collusion, the committee found that Trump’s business dealings before the campaign did not form the basis for collusion during the campaign. The committee also found that the intelligence community’s assessment that Putin favored Trump in the election “did not employ proper analytic tradecraft.”

While finding no issues with Trump, the committee instead uncovered alarming issues regarding the FBI’s surveillance of the Trump campaign and leaks from the intelligence community.

The FBI obtained a warrant to spy on Trump associate Carter Page using an unverified dossier funded by the Hillary Clinton presidential campaign and the Democratic National Committee. That dossier was compiled by British ex-spy Christopher Steele using second- and third-hand sources with ties to the Kremlin, according to the summary of findings.

“Continued leaks of classified information have damaged national security and potentially endangered lives,” the summary says. “Former Director of National Intelligence James Clapper, now a CNN national security analyst, provided inconsistent testimony to the Committee about his contacts with the media, including CNN.”

In response to the leaks, the committee recommended that Congress pass legislation to increase penalties for unauthorized leaks and that the Executive Branch should consider giving mandatory lie-detector tests to non-confirmed political appointees with top-secret clearances.