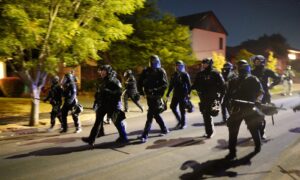 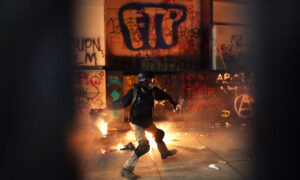 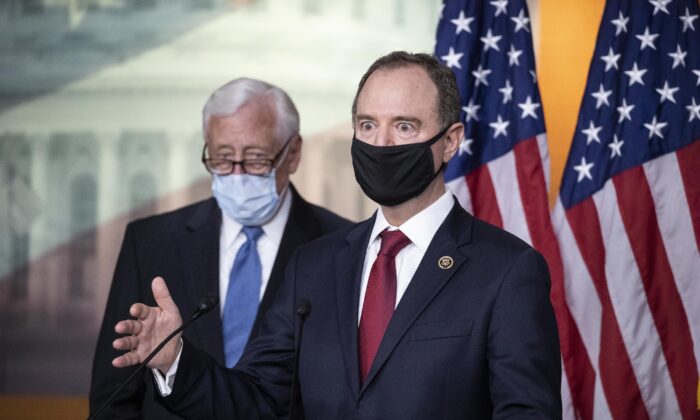 Rep. Adam Schiff (D-Calif.), chairman of the House Intelligence Committee, right, speaks accompanied by House Majority Leader Steny Hoyer (D-Md.), during a news conference on Capitol Hill, after a meeting at the White House in Washington on June 30, 2020. (Alex Brandon/AP Photo)
US News

The House Intelligence Committee is demanding answers from the Department of Homeland Security (DHS) about their handling of the riots in Portland and other U.S. cities.

Chairman, Rep. Adam Schiff (D-Calif.) sent a letter to DHS calling for information on the intelligence collected by the department on what he called peaceful protestors and journalists.

“Let me be clear: the reporting regarding the monitoring of peaceful protesters, creating and disseminating intelligence reports about journalists and protesters, and potential exploitation of electronic devices is deeply troubling,” Schiff wrote in the letter (pdf) to acting Homeland Security Secretary Chad Wolf and Office of Intelligence and Analysis (I&A) acting under secretary Horace Jen.

“The revelations thus far require a full accounting, and, if substantiated, must never be allowed to occur again. The Committee is therefore initiating, pursuant to its unique oversight and legislative authority, an investigation of I&A’s activities in Portland and in support of the Department’s response to protests nationwide,” Schiff wrote.

DHS did not immediately respond to The Epoch Times’ request for comment.

Schiff criticized the department for their decreased efforts to provide the information the committee has asked for since July 22.

“In response to the Committee’s July 22, 2020 letter and its subsequent requests, I&A was initially cooperative, providing a partial set of the requested documents and making officials available to the Committee for briefings. Cooperation has since decreased significantly and the provision of materials has paused,” Schiff wrote.

In addition, Schiff raised concerns about a former I&A official who was reported by Politico to be the one trying to change the wording in the intelligence reports.

“Recently reassigned Acting Under Secretary for Intelligence and Analysis Brian Murphy sought on July 25, 2020, to change the content of intelligence reports by directing that all references to “VIOLENT OPPORTUNISTS” be replaced with “VIOLENT ANTIFA ANARCHISTS INSPIRED.”

“The Committee is concerned that then-Under Secretary Murphy provided incomplete and potentially misleading information to Committee staff regarding I&A’s activities in Portland, including the actions of its personnel in the city, and I&A’s intelligence collection, analysis, and dissemination efforts related to Portland and other protests nationwide,” Schiff continued.

The House Committee is requesting all documents listed in the July 22 letter, reports related to I&A actions against protestors and, to question, close to a dozen DHS officials, including former acting Under Secretary for I&A Brian Murphy.

Schiff wrote that he wanted information from DHS by Monday, August 10.

The California Congressman ended his letter by emphasizing that the panel will consider “all options necessary to obtain compliance—including compulsory process.”