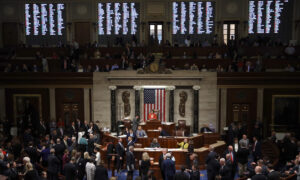 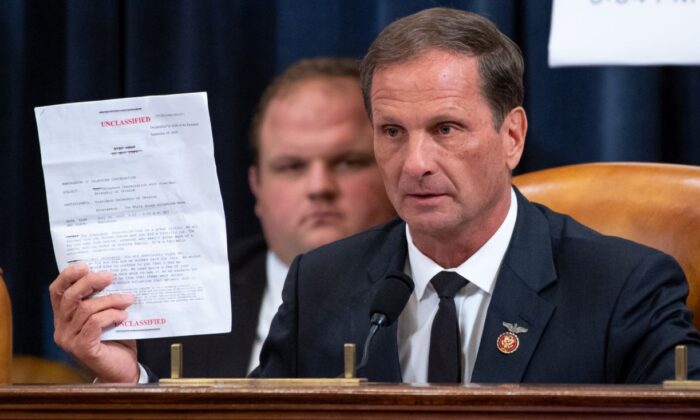 GOP House Intel Member on Impeachment: ‘I Think the Evidence Is Crumbling’

Rep. Chris Stewart (R-Utah), a member of the House Intelligence Committee, said that following the first week of public hearings, he believes the evidence for impeaching President Donald Trump is dwindling.

George Stephanopoulos, the host of ABC’s “This Week” program, asked Stewart on Nov. 17 about whether evidence is growing to link Trump to an alleged effort to press Ukraine to investigate former Vice President Joe Biden in exchange for military aid.

He then accused Democrats in the House of “goal post moving” by saying that they have changed their inquiry to “bribery” from “quid pro quo.” Last week, Speaker Nancy Pelosi (D-Calif.) told reporters that Trump could possibly be impeached for bribery—one of the impeachable offenses enshrined in the U.S. Constitution.

The president has denied any wrongdoing.

“I think the longer these [hearings go] on, I think the less the American people are going to support impeachment, because I think that the evidence just doesn’t support it,” Stewart said.

On Nov. 15, former Ukraine Ambassador Marie Yovanovitch said that she didn’t have any firsthand knowledge as to whether Trump committed bribery or criminal acts.

“Madam Ambassador, as you sit here before us, very simply and directly, do you have any information regarding the president of the United States accepting any bribes?” Stewart asked her during the hearing.

“Do you have any information regarding any criminal activity that the president of the United States has been involved with at all?” he asked her.

“In 30 seconds, @RepChrisStewart got the answers that House Democrats have spent 7 hours trying to avoid. 7 hours that Congress could’ve spent working for you—on drug price legislation, USMCA, immigration reform, or infrastructure—instead of for their own political careers,” it wrote.

Stewart said that Americans aren’t interested in the public hearings.

During the hearing, Trump wrote on Twitter about Yovanovitch, saying that “everywhere” she went, the situation there “turned bad.” Some Democrats claimed that was an attempt at witness intimidation.

“It’s very intimidating,” Yovanovitch said after House Intelligence Chairman Adam Schiff (D-Calif.) brought up the tweet mid-hearing. “I can’t speak to what the president is trying to do, but I think the effect is to be intimidating.”

Another House Intelligence Committee member, Rep. Mike Turner (R-Ohio) said he didn’t think it was witness intimidation, although he questioned the timing.

Turner told CNN on Nov. 17 that Trump’s tweet is “certainly not impeachable,” it isn’t criminal, and it’s “not witness intimidation.”

“The tweet was not witness intimidation,” Grisham said. “It was simply the president’s opinion, which he is entitled to.”

She also retweeted a comment by attorney and author Jenna Ellis, who pointed out that if not for Schiff interrupting Yovanovitch’s testimony to read the tweet to her, she couldn’t have been intimidated.

“But for Schiff interrupting and READING the tweet TO HER, she wouldn’t have known,” Ellis wrote. “She was mid-testimony. How is someone possibly ‘intimidated’ by something they weren’t even aware of?”