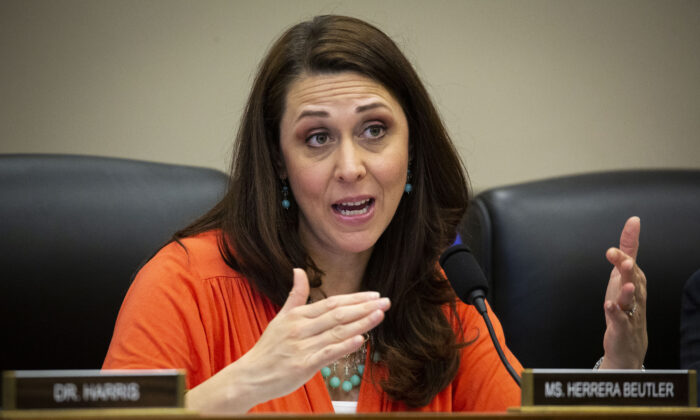 Two of the 10 House Republicans who voted to impeach former President Donald Trump last year face Trump-endorsed challengers on Aug. 2 in the Washington state primaries in their quest to stay in Congress.

Rep. Jaime Herrera Beutler (R-Wash.) is set to face eight challengers, including the Trump-endorsed Joe Kent, to represent Washington’s 3rd Congressional District. The state’s top-two primary system means that the top two vote-getters will advance to the general election in November regardless of party affiliation.

In the state’s 4th Congressional District, Rep. Dan Newhouse (R-Wash.) will face six Republican challengers and one Democrat. Among the challengers is Trump-endorsed Loren Culp, who lost to incumbent Washington Gov. Jay Inslee in the 2020 gubernatorial race.

For the remaining four, Rep. Tom Rice (R-S.C.) lost his reelection bid in a June primary; Rep. David Valadao (R-Calif.) advanced to the November general election in California’s newly drawn 22nd Congressional District; Rep. Peter Meijer (R-Mich.) will be in a primary vote on Aug. 2; and Rep. Liz Cheney (R-Wyo.) appears to face an uphill battle in an Aug. 16 primary.

A poll (pdf) in early July conducted by the Trafalgar Group found Herrera Beutler leading with 30.2 percent support, followed by Kent at 23 percent, and another GOP candidate, Heidi St. John, in third with 13.3 percent. Of the respondents, 8.2 percent said they were undecided.

Trump held a telephone rally for Kent on July 25, during which the former president called the former U.S. Army Green Beret a “tough cookie with a big, fat, beautiful heart.” Trump added that Kent would protect the First and Second Amendments and wouldn’t defund the police, if elected.

As for Herrera Beutler, Trump called her a “RINO,” an acronym for “Republican in name only.”

Late last month, Herrera Beutler, a six-term congresswoman, told The Associated Press that she is “not changing course” in her latest reelection bid, adding that she is “still the same Republican” that she has always been.

“He gave us the authorities that we needed to go out and crush the Islamic caliphate,” Kent added, referring to Trump.

Newhouse, a four-term congressman, seems to be trailing other Republicans, according to recent polls.

A June survey released by GOP candidate Jerrod Sessler’s campaign showed Democratic candidate Doug White in the lead with 23.9 percent, followed closely by Sessler with 23.1 percent, Newhouse with 19.8 percent, and Culp with 13.7 percent, according to the Spokane-based newspaper The Spokesman-Review.

Spry Strategies, a Tennessee-based polling firm, released a poll in April that showed Culp in the lead with 28.1 percent and Newhouse second at 19.7 percent, according to The Spokesman-Review. The poll also found that, in a head-to-head matchup, Culp led Newhouse 38.3 percent to 37.3 percent.

Last month, Culp told The Epoch Times how he had obtained Trump’s endorsement in February.

“I didn’t chase anybody’s endorsement, so Trump’s phone call was a complete surprise,” Culp said. “He read the endorsement letter to me and said he’s behind me 100 percent. Of course, all the other candidates attack me because they have to get through me first. We’re dealing with that.”

Republicans have vowed to launch many investigations aimed at putting pressure on the Biden administration if they win back the House. Among the issues they aim to probe are border security, the origins of the COVID-19 pandemic, and Hunter Biden.

Culp has also promised to join the GOP-led effort to probe the first son.

“When Republicans retake Congress, I pledge to investigate Hunter Biden and the president’s shady dealings with China,” Culp wrote on Twitter on July 13. “When we find that smoking gun, I will introduce another article of impeachment against Biden.”

On July 25, Sen. Chuck Grassley (R-Iowa) revealed that certain FBI officials had a “scheme” to wrongly label “derogatory information” on Hunter Biden as disinformation, based on what his office learned from “highly credible whistleblowers.” Subsequently, FBI officials halted investigative activities related to Hunter Biden in 2020.

A day later, Culp took to Twitter to criticize the FBI.

“The FBI played a role in censoring sensitive info about Hunter Biden ahead of the 2020 election,” Culp wrote. “Demand accountability. Charge and arrest those responsible.”