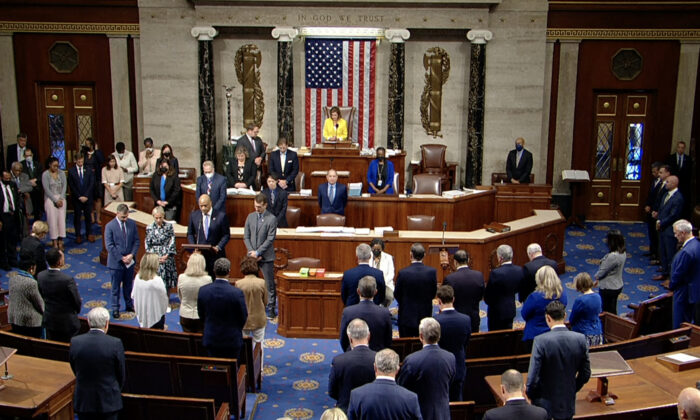 House lawmakers hold a moment of silence for Rep. Jackie Walorski at the U.S. Capitol in Washington on Aug. 12, 2022, in a still from video. (House TV via AP/Screenshot via The Epoch Times)
Congress

The House of Representatives on Friday held a moment of silence for Rep. Jackie Walorski (R-Ind.) and two of her aides, who died in an automobile crash while traveling in her Indiana district just over a week ago.

Walorski, 58, was in an SUV with two members of her congressional staff on Aug. 3 when it crossed the median of a northern Indiana highway and collided with an oncoming vehicle, according to the Elkhart County Sheriff’s Office.

Walorski’s 27-year-old staffer, Zachery Potts, of Mishawaka, Indiana, was driving. The congresswoman’s 28-year-old communications director, Emma Thomson, of Washington, was also in the vehicle. The woman who was driving the other vehicle also died in the crash.

Walorski was first elected to Congress in 2012 after six years in the state Legislature and was seeking reelection this year in the solidly Republican district.

She was active on agriculture and food policy in Congress, often working across the aisle on those issues. A co-chair of the House Hunger Caucus, she introduced legislation with Democrats to bring back a Nixon-era White House event on food insecurity.

On Thursday, numerous members of Congress were among several hundred mourners for the nearly two-hour service at Granger Community Church near Walorski’s northern Indiana home.

Republican House Minority Leader Kevin McCarthy spoke about Walorski’s work as a Christian missionary in Romania with her husband, as the director of a local humane society, and as a television news reporter before entering politics.

“Tell you the truth, Jackie never had a job. She always had a purpose and a mission,” McCarthy said.

Much of Walorski’s funeral highlighted her Christian faith, with her husband, Dean Swihart, an elementary school music teacher, playing saxophone with other musicians as they performed several hymns.

Rep. Ann Wagner (R-Mo.) recalled becoming friends with Walorski after they first joined Congress at the same time and lived in the same Washington apartment building for many years.

Wagner choked back tears as she called Walorski “one of the best.”

“Jackie was a no-nonsense, get it done and move it or lose it woman of strength and intense integrity,” Wagner said.

Indiana Gov. Eric Holcomb, a Republican, said Walorski loved the country and was proud of her home area.