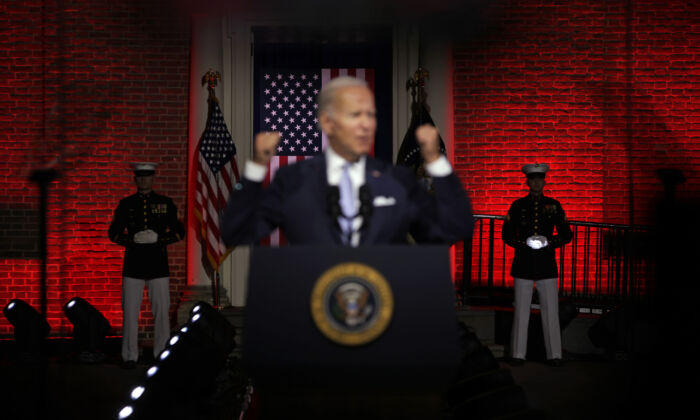 A group of House Republicans sent a letter questioning the Department of Defense (DoD) over President Joe Biden using Marines as “political props” during his recent campaign-style speech.

“We are gravely concerned that throughout the entirety of this partisan, politically charged, and divisive address to the nation, two United States Marines were visibly present flanking the President in the background,” GOP lawmakers wrote in a joint letter (pdf) sent to U.S. Secretary of Defense Lloyd Austin on Wednesday.

“The President’s use of active duty Marines as political props undermines the apolitical nature of our servicemembers and erodes trust in our military,” they continued.

The letter references Biden’s speech outside the Independence Hall in Philadelphia on Sept. 1—in front of deep red backlighting flanked by two Marines—that cast Trump-aligned Republicans as a threat to America. The Marines saluted Biden at the end of the speech as the president left the stage and walked inside the building behind the first lady.

The lawmakers asked Austin whether the Pentagon knew the contents of Biden’s speech before his appearance in Philadelphia, and whether it had known that the two active-duty service members would be presented on TV.

“Joe Biden inappropriately and illegally jeopardized Marines’ compliance with DoD regulations while he was denigrating & demonizing tens of millions of Americans,” House Republican Conference Chairwoman Rep. Elise Stefanik (N.Y.) posted on Twitter, urging an end to what she called “politicization” of the military.

The appearance has drawn intense fire from political rivals and mainstream media commentators, who said it is historically unusual for a president to denigrate his political opponents while using U.S. military members as political props.

The White House later said the president was in a bid to honor the military and its role in defending democracy.

“The presence of the Marines at the speech was intended to demonstrate the deep and abiding respect the president has for these service members, to these ideals and the unique role our independent military plays in defending our democracy, no matter which party is in power,” White House Press Secretary Karine Jean-Pierre said at a briefing last Friday.

A Pentagon spokesman did not immediately respond to a request for comment.