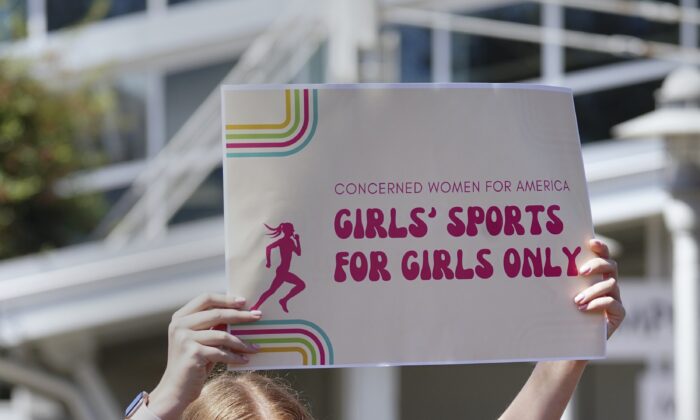 A protester holds a sign outside the arena where Pennsylvania's Lia Thomas was competing in the 500-yard freestyle final at the NCAA women's swimming and diving championships, at Georgia Tech in Atlanta, Ga., on March 17, 2022. (John Bazemore/AP Photo)
US

Facing refusal by Democratic leaders to allow the House of Representatives to vote on legislation that protects women’s sports, Rep. Greg Steube (R-Fla.) and Republican Study Committee (RSC) Chairman Rep. Jim Banks (R-Ind.) filed a discharge petition on behalf of H.R. 426, the Protection of Women and Girls in Sports Act of 2021.

First filed by Steube in January 2021, House Democratic leaders have kept H.R. 426 bottled up in the House Committee on Education and Labor without a hearing.

The proposal makes it “a violation of federal law for a recipient of federal funds who operates, sponsors or facilitates athletic programs or activities, to permit a person whose sex is male to participate in an athletic program or activity that is designated for women or girls.

The bill specifies that “sex shall be recognized based solely on a person’s reproductive biology and genetics at birth,” according to congress.gov.

“Allowing biological males to compete in women’s sports is anti-science and an affront to female athletes around the country. We have seen this practice prevent talented athletes from achieving their goals, stripping them of records, rosters, and scholarships,” Steube said in a statement provided to The Epoch Times.

“By refusing to allow a vote on protecting women’s sports, Speaker of the House Nancy Pelosi (D-Calif.) is enabling Congress to evade this critical and timely issue facing students across the country.

“Tonight, Republicans filed a discharge petition to force my bill, The Protection of Women and Girls in Sports Act, onto the House floor,” Steube said.

Steube said that in addition to taking steps to protect the integrity of women’s sports, he hopes the discharge effort will provide House Democrats an opportunity to “instead of paying lip service to women … actually do something for women and girls by signing onto this petition.

“As the left perpetuates a craze to eliminate gender, the American people deserve to know where their elected representatives stand on protecting women’s sports.”

Banks said the Steube bill is needed because “Congress passed Title IX 50 years ago, but the left is now scheming to effectively destroy that important civil rights protection. House Republicans must respond by strengthening protections for female athletes and by forcing Democrats to publicly state whether they support women’s right to compete on a level playing field.”

The Steube bill discharge petition follows a growing number of incidents in which men who claim to identify as women compete in athletic events previously open only to women.

The discharge petition is a rarely successful procedure under which supporters of a legislative proposal that is languishing in committee must gather 218 signatures of House members calling for the measure to be discharged from the holding committee.

Once the discharged proposal arrives on the House floor, time must be allotted for debate and to consider amendments. But there are multiple legislative procedures that opponents of the measure can use to delay or continue to prevent an up or down vote.

The House Rules Committee, for example, can adopt an alternative rule for allowing the House to debate and vote on the discharged proposal, including rules that might bar consideration of certain amendments favored by representatives who would not otherwise vote for it.

“In recent decades, only a handful of measures subjected to the discharge process have reached the House floor,” according to a 2019 report by the Congressional Research Service (CRS), the most recently available such analysis.

More often, as the number of signatures on a discharge petition approaches the required 218, House leaders will scramble to get the committee to report the contested proposal to the full House but not put it on the calendar for a vote, which renders the discharge effort irrelevant.

Supporting the discharge petition, Heritage Action for American Executive Director Jessica Anderson said in a statement that “allowing men to compete in women’s sports is dangerous, unfair, and highly illogical. Women should have the right to compete on a level playing field and shouldn’t have to sacrifice their athletic careers at the altar of transgender rights.”

Similarly, Carrie Lukas, president of Independent Women’s Forum, said: “It’s time for our leaders to make public their position on women’s sports. Americans want to know: Should female athletes be relegated to the sidelines? Yes or No.”