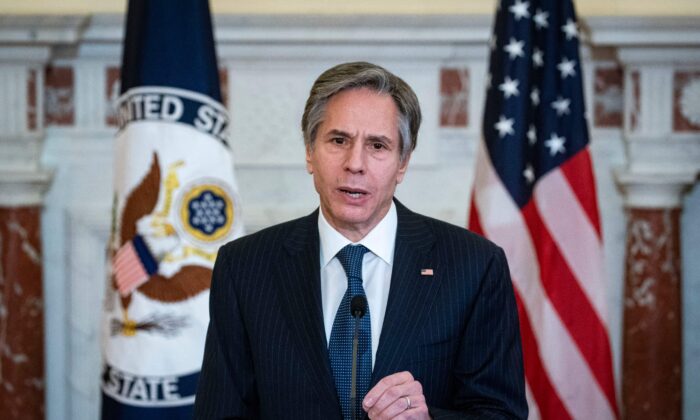 Secretary of State Antony Blinken at the State Department in Washington on April 5, 2021. (Alexander Drago/AFP via Getty Images)
US

House Republican Study Committee (RSC) chairman Rep. Jim Banks (R-Ind.) and 15 GOP colleagues are challenging the legality of State Department grants—of as much as $500,000 each—to international “organizations committed to the practice and spread of atheism and humanism.”

Their challenge is contained in a June 30 letter to President Joe Biden and Secretary of State Anthony Blinken concerning the department’s competitive grant process issued in April 2021 for “Promoting and Defending Religious Freedom Inclusive of Atheist, Humanist, Non-Practicing and Non-Affiliated Individuals” in South Central Asia, the Middle East and North Africa.

“To be clear, atheism and ‘humanism’ are official belief systems.

“As an initial matter, therefore, we would like to know what other United States government programs supported with appropriated funds are being used either to encourage, inculcate, or to disparage any official belief system—atheist, humanist, Christian, Muslim, or otherwise,” Banks and the other signers told Blinken.

“It is one thing for the department to be tolerant and respectful of a wide range of belief systems, and to encourage governments to respect the religious freedom interests of their citizens. It is quite another for the United States government to work actively to empower atheists, humanists, non-practicing, and non-affiliated in public decision-making,” the signers continued.

“Any such program—for any religiously-identifiable group—in the United States would be unconstitutional.

“In addition to its constitutionally dubious legal foundation, we also question how such a grant or cooperative agreement program advances the foreign policy interests of the United States,” the signers wrote.

A State Department spokesman could not be reached for comment.

In countries with a dominate religious culture such as the Middle East and parts of North Africa where Islam dominates, the signers warned Blinken that providing U.S. tax dollars to groups promoting non-Islamic faiths is likely to be perceived by local populations as subversive funding ”from a foreign power designed to shatter local religious and cultural relationships.”

In addition, the signers told Blinken they have reviewed other similar official State Department Notices of Funding Opportunity (NOFO) documents that “violate both the Establishment and Free Exercise clauses, but also the No Religious Test Clause of Article VI of our nation’s constitution.”

The funding provided to the organizations selected by the department would be used to support building “networks and advocacy groups” for atheists, according to the official notice.

“This would be analogous to official State Department promotion of religious freedom ‘particularly for Christians’ in China, with the express goal being to build a corresponding missionary network,” the signers told Blinken.

“Obviously, this goal that would never pass constitutional muster and would be derided by radical Leftist bureaucrats in your agency as completely out-of-bounds.

“So why is this atheist NOFO not viewed with similar objection,” the signers asked.

“Americans rightly discern this as a part of the broader effort on the part of your administration to promote radical, progressive orthodoxy abroad. Atheism is an integral part of the belief system of Marxism and Communism,” the signers said.

The letter to Biden and Blinken regarding State Department grants to support atheism and other religious belief systems follows revelations last week that officials are preparing to appoint a Special Representative for Equity and Justice.

The appointment is part of Biden’s government-wide “Equity Action Plan” that mandates all federal departments and agencies to appoint such officials.

Congressional Republicans criticize the plan as a thinly disguised effort to use the federal government to promote Critical Race Theory (CRT), the controversial view that the color of an individual’s skin determines their values and how they perceive people of other ethnicities.

In addition to the U.S. Embassy in Germany flying a Black Lives Matter flag, the Republicans pointed to the U.S. Vatican City Embassy flying an LGBT pride flag, which they describe as “a transparent provocation at tenets of Christianity,” and the State Department’s creation of a new gender classification for use on passports for individuals of “unspecified or another gender identity.”