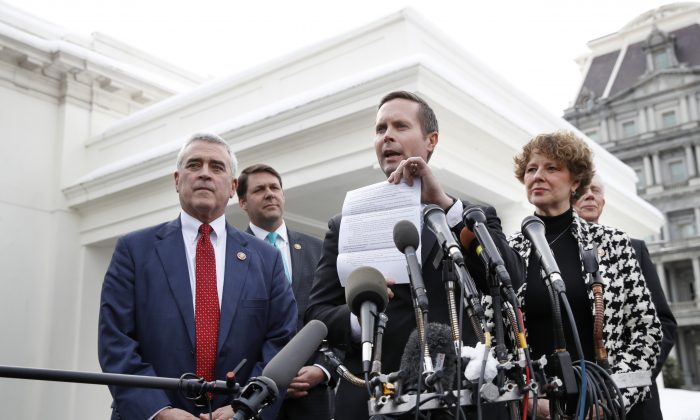 Rep. Rodney Davis, (R-Ill.), center, holds up a paper about President Donald Trump's proposals for the border, as he and other House Republicans speak to the media, Tuesday, Jan. 15, 2019, after meeting with the president at the White House on border security. (AP Photo/Jacquelyn Martin)
US

Allowing congressmen to vote remotely by proxy and participate in committee hearings digitally instead of in person have “crushed the ability to govern in a bipartisan fashion,” according to the top Republican on the committee that administers the House of Representatives.

“These are single-handedly the worst policies that have been enacted, that have really crushed our ability to govern in a bipartisan fashion,” Rep. Rodney Davis (R-Ill.) told The Epoch Times on March 25.

The decision to allow members to be physically absent from the floor of the House, but cast votes by giving their proxy to a colleague, as well as to convene House committees to conduct official business virtually with some or all of the members not physically present, was made by the Democratic majority in March 2020 at the recommendation of Speaker of the House Nancy Pelosi (D-Calif.).

The changes were part of a multitude of restrictions that Pelosi and the Democratic majority imposed in response to the COVID-19 pandemic. Other restrictions included social distancing, remote working for staff members, and restricting public access to the U.S. Capitol and the multiple buildings housing members’ offices and staffs.

Davis is the top Republican on the House Committee on Administration, which not only manages the day-to-day functioning of the lower chamber of Congress, but also has a great deal to do with how the Capitol Complex is managed. He’s likely to succeed the panel’s current chairman, Rep. Zoe Lofgren (D-Calif.), should voters return Republicans to control of the House in the November mid-term congressional elections.

“The point I made two years ago, when I argued against proxy voting, was that it would change the character of the institution, and I think we have seen that play out since then,” he said.

“We have Democratic members who have not shown up in Washington to cast a vote since the vote on the speaker of the House. That is not a pandemic response, that is a laziness response.”

Members are required to be physically present on the floor of the House chamber in order to cast a vote on the day a new speaker is chosen.

“It’s all terrible because it takes away what the House is supposed to be, which is an institution of individuals getting together to govern our great nation. Imagine if our Founding Fathers decided to just call it in, rather than going to convene and work out our Constitution,” Davis said.

Pelosi entered Congress in 1987, while Hoyer was first elected in 1980. Members were allowed to vote in committees by proxy prior to 1995.

He pointed to former long-time House Energy and Commerce Committee Chairman John Dingell (D-Mich.) as an example of a committee chair who effectively used proxies to approve policies favored by Democrats. Dingell chaired the panel for 16 years between 1981 and 2009.

“He used to have his paper stack there, his majority of one, with whomever he needed to call in. He knew no one could stop him because he could proxy every Democratic vote,” Davis said.

“[Pelosi] and Steny both saw the control that proxy gave them and, with the small majority that the Democrats have, which is historically small, I think at the beginning of 117th Congress, they knew that they had to bring in this proxy process to be able to keep control.

“The place is even more polarized, and I think that is directly due to proxy voting because it allows the Speaker to control a certain block of votes, whether someone is there or not. She is able to keep the temperature exceedingly high, and that allows her members to vote on the basis of politics rather than on policy.”

The Illinois Republican said that “fortunately for Republicans, those votes are going to come back to haunt many of these Democrats that are in a vulnerable seat, and we are going to win those seats.”

A spokesman for Pelosi didn’t respond to The Epoch Times’ request for comment.

A Hoyer spokesman referred to the majority leader’s March 17 testimony before the House Rules Committee, in which he said: “With regard to proxy voting, I see a number of cases in which it may be appropriate to continue having it as an option. Not as a preference, not as a practice, but as an option, such as when Members may be ill, have to care for a sick loved one, or welcome a new child. There may also be future cases [of] national emergencies, [we] talked about Ukraine. I don’t know that they don’t vote by proxy … or by electronic device. But if your Parliament is being bombed, it’s probably a good thing to do.”

Proxy voting and virtual hearings have been extended, 45 days at a time, repeatedly since 2020, and the current extension expires on March 30.