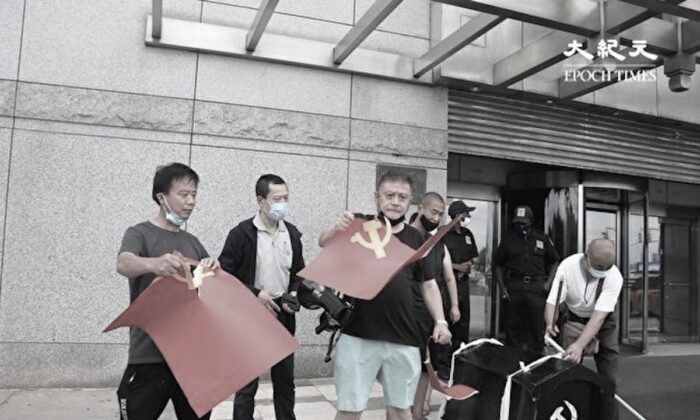 Scores of exiled Tibetans, Hong Kongers, Chinese dissidents, and others burn down the flags of the Chinese Communist Party (CCP) and present a black coffin for the CCP in protest of its brutal rule in China in front of China's consulate general in New York City, on July 1, 2021, its 100th anniversary. (Huang Xiaotang/The Epoch Times)
Chinese Regime

Chinese officials use Interpol Red Notices to enlist other countries’ law enforcement resources in the regime’s international campaign to harass, intimidate, silence, and detain critics of the Communist dictatorship living overseas, according to a Republican House member.

“My understanding is there are Red Notices that are published through Interpol saying, ‘We need an extradition of this individual,’ or ‘We need this person detained or arrested’ because of accusations of crimes,” Rep. Brian Mast (R-Fla.) told a hearing of the Congressional–Executive Commission on China on June 15.

He was referring to the notices issued by Interpol, the international law enforcement cooperative that 195 countries use to share information about individuals being sought in criminal cases.

While Red Notices aren’t international arrest warrants, according to Interpol, the notices do provide extensive information that can be used to track down suspects who can be detained and extradited back to the requesting nation.

“We absolutely share your concern for the potential misuse of Interpol systems to target dissidents, human rights defenders, activists, journalists, and others for People’s Republic of China (PRC) repression,” Uzra Zeya, undersecretary of state for civilian security, democracy, and human rights, said in response to Mast.

Zeya said the Department of Justice (DOJ) is the lead U.S. agency in dealing with Interpol, but the State Department “works in close collaboration” with the DOJ. She added that Interpol established a commission in 2016 whose purpose is to review Red Notice requests to ensure they are not being used in what commission members and the witnesses referred to as China’s “transnational repression.”

Transnational repression occurs when Beijing dispatches agents to other countries for the purpose of suppressing the activities of dissidents living in those countries who speak out against the Chinese Communist Party (CCP).

China is a major instigator of transnational repression, but other countries also commit such acts, including Russia, Egypt, and Saudi Arabia, according to the commission’s co-Chairman Rep. Jim McGovern (D-Mass.). Sen. Jeff Merkley (D-Ore.) is the other co-chairman.

“The Chinese government tries to deflect criticism of its human rights record by claiming it has a sovereign right to do what it wants within its own borders, and yet Chinese officials have no problem setting aside sovereignty principles when they reach across our border to threaten the human rights of Americans,” McGovern told the hearing.

Rep. Chris Smith (R-N.J.) expressed concern about the lack of confidentiality when somebody files a report to federal authorities of an alleged act of transnational repression.

“One of the ways the Chinese Communist Party maintains a chokehold on dissidents and people once they come here are the people who are left behind—their family members who can then be retaliated against with impunity,” he said.

The New Jersey Republican suggested that a confidential hotline should be established for victims of transnational repression in the United States who could report their experiences without fear of jeopardizing family members back home in China.

In her opening statement to the hearing, Zeya emphasized that “the reach and frequency of the PRC’s global repression is growing more alarming by the day. The historical data also proves that this phenomenon is not a recent one. Non-Governmental Organizations (NGOs) have documented thousands of cases over the last several years of the PRC conducting involuntary returns to the PRC from over 120 countries worldwide.”

She added that “the extent and sophistication of PRC tactics are deeply concerning. They include physical threats, harassment, and surveillance against individuals; threatening individuals’ family members within the PRC with detention, imprisonment, or the loss of economic opportunities; digital threats including online harassment, surveillance, and other malicious cyber activity, and use of disinformation and online smear campaigns; misuse and attempted misuse of other states’ immigration enforcement mechanisms and international law enforcement systems, including Interpol; and applying direct bilateral pressure on other nations to return individuals to the PRC. PRC agents apply these tactics against individuals of all nationalities, including U.S. citizens in the United States.”

As part of what Zeya called President Joe Biden’s “whole-of-government” approach to combating transnational repression, the State Department is “proactively engaging the full spectrum of stakeholders impacted by the PRC’s transnational repression, including most importantly, the targeted communities themselves, such as Uyghurs, Tibetans, Falun Gong practitioners, Hong Kongers, and human rights defenders; civil society representatives; like-minded and affected governments; and the business and investor community.”

Also testifying before the commission’s hearing was Serena Hoy, the Department of Homeland Security’s assistant secretary for international affairs, who confirmed that China has used Interpol Red Notices to seek at least 100 individuals residing in other countries that the regime views as threats.