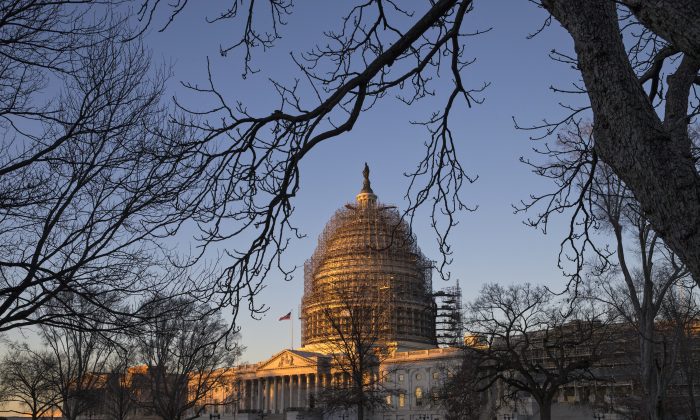 The Capitol reawakens to a bright sunrise and sub-freezing temperatures in Washington, D.C., on Jan. 5, 2016, as lawmakers return to work. (AP Photo/J. Scott Applewhite)
Politics

WASHINGTON—Republicans launched their latest, doomed try to kill President Barack Obama’s health care overhaul on Tuesday. With no chance of succeeding, the House vote was solely an exercise in election-year political messaging.

Tuesday’s vote was an attempt to override Obama’s veto last month of legislation gutting much of the law and ending federal payments to Planned Parenthood. Republicans had no chance of mustering the two-thirds majority needed to reverse a veto, but Speaker Paul Ryan (R-Wis.) said the effort would send an important signal.

“What we’re proving today is if we have a Republican president next year, we will repeal Obamacare,” Ryan told reporters, using a nickname for a law that GOP lawmakers have despised since it was pushed through Congress six years ago.

What we’re proving today is if we have a Republican president next year, we will repeal Obamacare.
— House Speaker Paul Ryan (R-Wis.)

Ryan also said the GOP will offer its own proposal this year for replacing the law, saying it would lower costs and “restore the doctor-patient relationship.” Republicans have criticized the law for increasing medical costs and giving patients less control over their care, charges Democrats dispute.

The GOP has struggled for years to coalesce behind a replacement plan.

Democrats mocked the GOP for trying yet again—and on Groundhog Day, no less—to kill or curb the law. Democrats said Tuesday’s vote marked the 62nd such effort since Republicans took control of the House in 2011, and cited estimates from the nonpartisan Congressional Budget Office that the rollback would end medical care for millions of Americans.

Van Hollen also said Republicans had “a lot of gall” to try blocking Planned Parenthood’s federal money a week after a grand jury in Texas found no wrongdoing by the organization and instead indicted anti-abortion activists who had secretly filmed videos of the group’s officials.