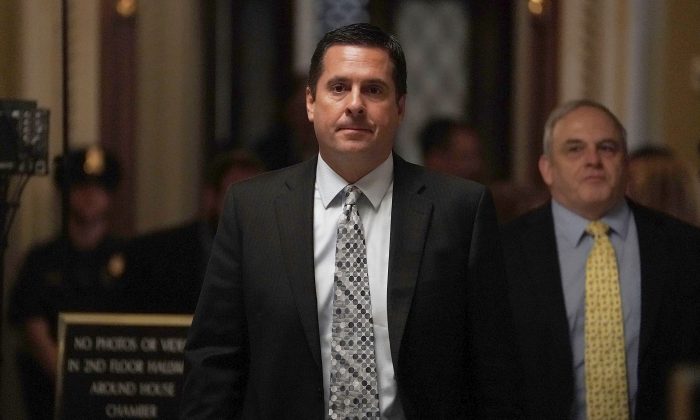 House Republicans are trying to find out more about the role the CIA played in the investigation the FBI started in 2016 into alleged ties between Russia and the campaign of then-candidate Donald Trump.

The GOP investigators are focused on information related to the Trump-Russia probe the CIA provided to the FBI, Rep. Devin Nunes (R-Calif.) told Fox and Friends on April 19.

“We need to know exactly what did the CIA give to the FBI in 2016,” he said. “That’s what our investigation is now focusing on.”

The investigation, taken over in May 2017 by a special counsel, former FBI Director Robert Mueller, couldn’t establish any coordinated meddling in the 2016 election by the Trump campaign and Russia.

The probe, however, involved extensive spying on the Trump team, including the use of multiple informants who were sent to snoop on campaign staff.

The Justice Department’s Inspector General (IG) reported in December 2019 that he found more than a dozen problems in a FISA warrant used by the FBI to justify its probe to surveil former Trump campaign aide Carter Page. The FBI has since acknowledged that the resulting year-long surveillance was illegal, at least for the last six months.

The warrant was centered around information from the Steele dossier, a collection of unsubstantiated allegations about Trump-Russia collusion put together by former British spy Christopher Steele, who was paid for the job through intermediaries by the Democratic National Committee and the 2016 campaign of former State Secretary Hillary Clinton.

The IG report shows that the FBI gradually collected exculpatory information, including from Steele’s sources, but included almost none of it in the warrant application when it was submitted to the secret FISA court every three months for renewal.

In mid-January 2017, the bureau learned that a part of the dossier was polluted by disinformation—lies intentionally spread by Moscow, according to recently declassified parts of the IG report. The report indicated this assessment was provided by a U.S. intelligence agency, said the office of Sen. Chuck Grassley (R-Iowa), who requested the declassification together with Sen. Ron Johnson (R-Wis.).

The Russia probe is now itself the target of an investigation by U.S. Attorney John Durham.

The CIA has been among the targets of the investigation, The New York Times reported on Feb. 13, using unnamed sources.

GOP investigators have long questioned what led the FBI to open the Russia investigation in the first place.

The IG concluded that the FBI was in its right to open the probe, given the low bar its internal regulations set for predicating investigations. He also said he didn’t find any documentary or testimonial evidence that the investigation was motivated by political bias.

Durham, however, said in a rare statement he disagreed with the IG on the matter of predication.

Former CIA Director John Brennan has publicly acknowledged that the agency provided the FBI some information about supposed Trump-Russia contacts that was then used to start the probe. It’s not clear, though, what specifically was provided.

“I was aware of intelligence and information about contacts between Russian officials and U.S. persons that raised concerns in my mind about whether or not those individuals were cooperating with the Russians, either in a witting or unwitting fashion, and it served as the basis for the FBI investigation to determine whether such collusion [or] cooperation occurred,” Brennan said in his May 23, 2017, congressional testimony.

In August 2016, Brennan gave a briefing of then-Sen. Harry Reid (D-Nev.), who then sent a letter to the FBI urging it to investigate Page’s supposed meeting with “high-ranking” Russians who were under U.S. sanctions. This accusation against Page has only been publicly spread through the Steele dossier. He has denied any such meeting and there has been no evidence of it having taken place.

Brennan has claimed that he didn’t see the dossier until “later” in 2016.

Barr highlighted the seriousness of Durham’s investigation in a recent interview with Fox News’ Laura Ingraham.

“My own view is that the evidence shows that we’re not dealing with just mistakes or sloppines,” he said. “There was something far more troubling here. And we’re going to get to the bottom of it. And if people broke that law and we can establish that with the evidence, they will be prosecuted.”

Barr said that the FBI had no basis for starting the Russia probe and that President Trump has had “every right to be frustrated” about it.

“I think what happened to him has been one of the greatest travesties in American history. Without any basis, they started this investigation of his campaign. And even more concerning, actually, is what happened after the campaign, a whole pattern of events while he was president … to sabotage the presidency. … or at least had the effect of sabotaging the presidency,” he said.

Correction: A previous version of this article incorrectly indicated a paraphrase of what Rep. Devin Nunes told Fox and Friends was a direct quote. The Epoch Times regrets the error.