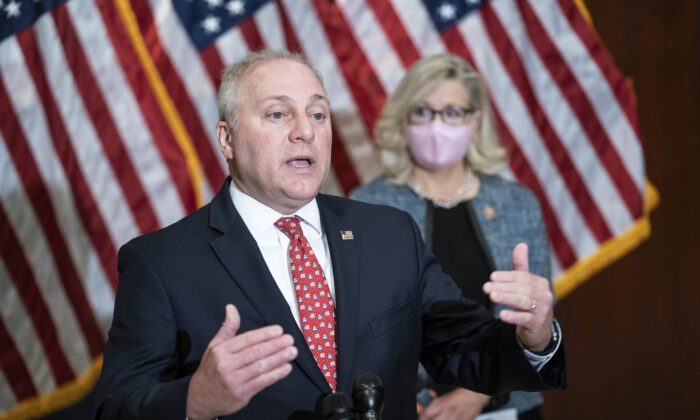 In a statement from Rep. Steve Scalise’s (R-La.) office Wednesday, the House Minority Whip said that Republican leadership would be asking members to vote against the $1.2 trillion infrastructure bill.

In the Senate, the infrastructure bill passed easily, with all 50 Democrats and 19 Republicans in the upper chamber supporting the bill. Of those, many big-name Republicans like Minority Leader Mitch McConnell (R-Ky.) and former presidential candidates Mitt Romney (R-Utah) and Lindsey Graham (R-S.C.) signed on with the bill.

But the bill has already faced challenges in the House due to divisions between the moderate and progressive wings of the Democratic caucus.

Now, Republican leadership is adding to Pelosi’s trouble by asking its members in the lower chamber to vote against the legislation.

In his statement, Scalise explained the party’s reasoning for this. He wrote, “Speaker Pelosi has made it clear that the Senate infrastructure bill is now inextricably linked to her extremist, socialist $3.5 trillion tax and spend bill.”

Scalise referenced the party’s internal power struggles, noting that “the multi-trillion-dollar reconciliation bill will not be ready for the floor in time for the self-imposed deadline of September 27th due to disarray in [Pelosi’s] caucus.” Because of this, writes Scalise, “Democrats are moving forward with the Senate infrastructure bill.”

Despite its internal problems, Democratic leadership Tuesday expressed confidence that they could get both bills passed. They indicated that discussions with the progressive wing of the caucus were ongoing, as leadership tries to get the 95-strong group on board with voting for the infrastructure bill before the Sept. 27 deadline.

Scalise then explained why Republicans “vehemently oppose” the Democratic budget.

He wrote that “the far left’s multi-trillion-dollar tax increases on working families and small businesses will result in even higher inflation that will drive up prices, destroy millions of jobs and undermine wages, while adding trillions more dollars to the national debt.”

The policies in the bill, said Scalise, are “reckless.”

He continued “Speaker Pelosi’s legislative strategy solidifies that a vote for the infrastructure bill paves the way for passage of reconciliation—Republicans should not aid in this destructive process.”

Scalise went a step further, however, writing as well of the problems in the infrastructure bill itself.

The bill, he said, “provides $550 billion in new spending over 5 years, but less than half of the new spending goes towards traditional infrastructure.”

Scalise noted that the bill “adds inflationary spending into an underperforming economy by failing to fully offset the bill.” Citing Congressional Budget Office estimates, Scalise said that only $180 billion would be fully paid for, while the legislation would add $256 billion to the deficit over the next ten years.

Scalise alleged as well that the bill “gives the Department of Energy tens of billions of dollars in a Solyndra style slush fund.”

Here, Scalise is referencing a solar energy start-up that received loan guarantees and around $500 million in funding from the Department of Energy before unexpectedly declaring bankruptcy in 2011.

Finally, Scalise says that the infrastructure bill “fails to include any meaningful National Environmental Policy Act permitting reforms, which means that infrastructure projects included in this package will continue to be delayed by Washington red tape.”