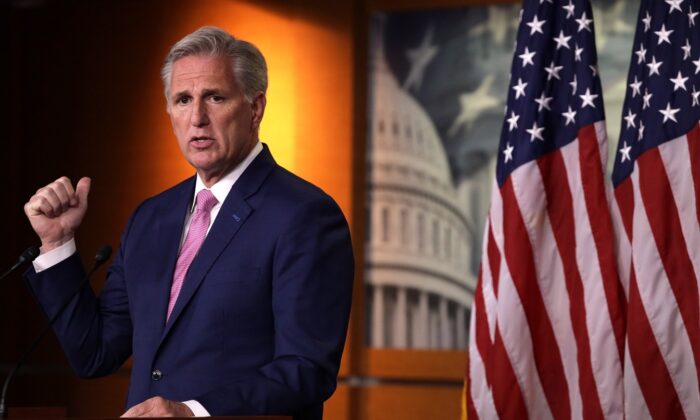 In the letter Friday, McCarthy and top Republicans on the House Oversight and Judicial committees said the Department of Justice (DOJ) “is proceeding in a manner that is eroding public trust and confidence” by not having Garland or Wray testify before committees.

Since the Aug. 8 search, both the DOJ and FBI have provided few details about why agents searched Trump’s residence or what they were trying to find. A now-unsealed warrant, property receipt, and affidavit show that the DOJ is investigating Trump for possible violations of the Espionage Act and obstructing justice.

At the same time, McCarthy accused the DOJ of leaking information to the media about the FBI raid and DOJ’s behind-the-scenes activity.

“The unprecedented nature of the FBI’s search of President Trump’s home and the broad public interest surrounding the raid require more than just a private briefing with the congressional and intelligence committee leadership,” McCarthy’s letter read.

House Republicans have little power in issuing subpoenas to compel testimony and documents relating to the Mar-a-Lago search because they’re currently the minority. Analysts say that Republicans have a good chance of taking back the House in the upcoming 2022 elections because the party of the president tends to lose seats in midterms. Democrats currently hold a slim majority in the House.

Friday’s letter appears to be a preview of Republicans’ agenda if they were to take back the House. Rep. Jim Jordan (R-Ohio), the ranking House Judiciary member, and Rep. James Comer (R-Ky.), the ranking Republican on the House Oversight panel, have sent similar letters to the DOJ about documents and testimony over the raid.

While accusing the DOJ of lacking transparency, Garland cannot “ignore its obligation to submit to public hearings in the House Judiciary Committee, which is charged with broad oversight of the operations and functions of the DOJ and the FBI,” McCarthy added.

“Republicans on the House Judiciary Committee have called on you to testify in public; the Administration’s failure to appear before the Judiciary Committee only willfully illustrates a desire by the DOJ and the FBI to avoid oversight by their committee of primary jurisdiction,” the GOP leader continued.

On Friday, U.S. District Judge Aileen Cannon ordered the release of an inventory from the FBI’s Mar-a-Lago search that was previously filed under seal. Other than allegedly classified materials, FBI agents also seized more than 11,000 non-classified government documents, the court filing shows.

Trump and several former aides said that the former president issued declassification orders while he was still in office, including materials connected to the FBI Crossfire Hurricane investigation.