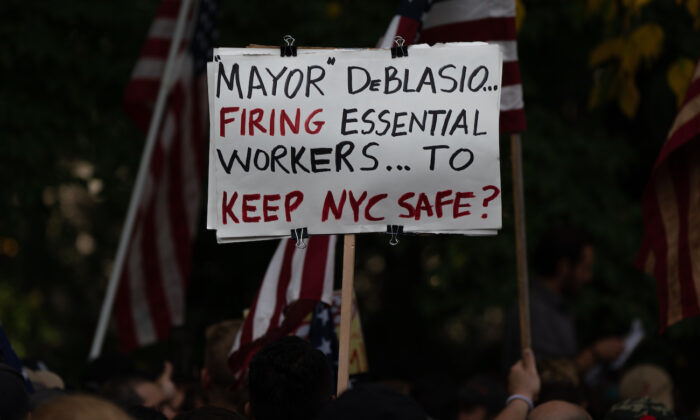 Americans who fear losing their jobs because they object to getting one of the vaccines against the CCP (China Communist Party) virus would be able to sue in federal court under legislation introduced by Rep. Diana Harshbarger (R-Tenn.).

“The Biden administration’s unconstitutional mandates forced many Americans to choose between their job or getting vaccinated,” Harshbarger said in a statement issued by the Republican Study Committee (RSC). “While this is wrong and never should have happened, those forced into vaccination should have full rights to pursue legal action if they are injured.

“My bill—the Protecting Americans’ Medical Rights Act—is a step in the right direction toward holding this administration and our government accountable.”

Rep. Jim Banks (R-Ind.), chairman of the RSC, which is the largest caucus in Congress, with 159 members, lauded Harshbarger’s proposal, saying, “the left forced Americans into medical procedures against their will and simultaneously restricted their right to sue for injuries. It’s unacceptable.

“If vaccine mandates are ethical, why do they require a legal carveout? The Protecting Americans’ Medical Rights Act will give Americans hurt by a medical decision they were forced into a real, substantive legal recourse,” Banks said.

No Democrats are co-sponsoring the proposal.

It isn’t known how many individuals have been fired—in government or private sectors—as a result of their refusal to be vaccinated, but employers around the country, especially in the health care industry, have laid off thousands of such people.

President Joe Biden sought to mandate that all federal employees and those working for most corporations be vaccinated or face termination, but the Supreme Court struck down the requirement last month.

Federal civilian employees are required to be vaccinated, as are members of the military.

Thousands of individuals covered by the civilian and military mandates have gone to federal court seeking redress after their requests for medical or religious exemptions were denied.

In a case in which a Navy SEAL and a Marine colonel are appealing the Department of Defense denial of their requests for religious exemptions from the vaccine, U.S. District Court Judge Steven Merryday issued a temporary injunction against the government.

Merryday said the two plaintiffs are likely to succeed in their appeal.

The decision “vindicates the rule of law, which the Department of Defense and every military branch have violated with this unlawful COVID shot mandate,” said Mat Staver, founder and chairman of the Florida-based Liberty Counsel public interest law firm representing the two unnamed military members.

“These brave service members give their lives to defend the Constitution, and sadly, the freedom they fight to preserve was denied them—until today.”

Under current federal law, the only potential recourse available to private individuals who lose their jobs after declining to be vaccinated is the Countermeasures Injury Compensation Program (CICP) administered by an office within HHS.

But the GOP study committee described the CICP as “notoriously stingy,” and added that “there is no court, judge, or right to appeal. Decisions are entirely made by a bureaucratic administrator.

“Compensation for lost wages and death benefits are arbitrarily capped, there is no opportunity for collecting damages for pain and suffering, and there is only a one-year statutory limit for making a claim.”

Claimants aren’t able to seek compensation for their legal costs, which makes it even more difficult to find competent counsel willing to take such cases, according to the RSC.

More than 937,000 Americans have reportedly died as a result of the pandemic that was first detected in the United States in January 2020.