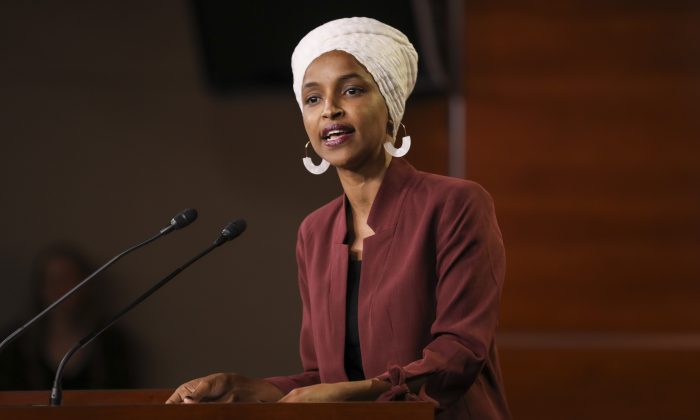 Rep. Ilhan Omar (D-Minn.) speaks at a press conference at the Capitol in Washington on July 15, 2019. (Holly Kellum/NTD)
Politics

WASHINGTON—Judicial Watch filed an ethics complaint on July 23 asking for an investigation into allegations of multiple crimes committed by Rep. Ilhan Omar (D-Minn.) tied to a 2009 marriage to her own brother.

In a hand-delivered letter, the nonprofit government watchdog told the chairman of the House Office of Congressional Ethics (OCE), David Skaggs, that there is “substantial, compelling and, to date, un-refuted evidence” that the Minnesota Democrat may have committed “immigration fraud, marriage fraud, perjurious statements on her Minnesota divorce filings, and falsifications on her tax returns.”

Skaggs was appointed by Speaker of the House Nancy Pelosi (D-Mass.) as chairman of the OCE board of directors. Alison Hayward, attorney and former George Mason University law professor, was appointed vice chairman by House Minority Leader Kevin McCarthy (R-Calif.).

Omar is a Somali refugee who fled with her family from her war-torn country to the United States in 1992 and was granted asylum in 1995. She became a U.S. citizen in 2000, was elected to the Minnesota legislature in 2016, and then elected to Congress in 2018.

Omar is one of the four radical Democrats known as “The Squad,” which also includes Rep. Alexandria Ocasio-Cortez (D-N.Y.), Rep. Rashida Tlaib (D-Mich.), and Rep. Ayanna Pressley (D-Mass.). They have clashed repeatedly with Speaker of the House Nancy Pelosi (D-Calif.) and President Donald Trump.

Earlier this year, Omar was ordered by Minnesota state election officials to pay a fine of $500 and reimburse her campaign committee for $3,469 in illegal expenditures in 2016 and 2017, including a $1,500 payment to a law firm that assisted her in responding to some of the allegations now raised by Judicial Watch.

In its complaint filed with the OCE, Judicial Watch said Omar’s actions “would also breach the Code of Ethics for Government Service, to which all federal officeholders are subject, [stating,] ‘Any person in government service should uphold the Constitution, laws, and legal regulations of the United States and all governments therein and never be a party to their evasion.’

Judicial Watch said it based its complaint on evidence compiled over a three-year period by investigative reporters David Steinberg and Preya Samsundar and Scott Johnson of Power Line, a conservative blog based in Minnesota.

The complaint continued, stating that Omar “married her biological brother, Ahmed Nur Said Elmi, a citizen of the United Kingdom, in 2009, presumably as part of an immigration fraud scheme.

“The couple legally divorced in 2017. In the course of that divorce, Ms. Omar submitted an ‘Application for an Order for Service by Alternate Means’ to the State of Minnesota on Aug. 2, 2017, and claimed, among other things, that she had had no contact with Ahmed Nur Said Elmi after June 2011.

“She also claimed that she did not know where to find him. The evidence developed by Mr. Steinberg and his colleagues demonstrates with a high degree of certainty that Ms. Omar not only had contact with Mr. Elmi, but actually met up with him in London in 2015, which is supported by photographic evidence.

“Of particular importance are archived photographs taken during a widely reported trip by Ilhan Omar to London in 2015, posted to her own Instagram account under her nickname ‘hameey,’ in which she poses with her husband/presumed brother, Ahmed Elmi.

“These photographs from 2015 are documentary evidence that in fact she met up with Mr. Elmi after June 2011 and before the date she signed the divorce document in August 2017, thereby calling into question the veracity of her claim that she had not seen Mr. Elmi since June 2011.”

Judicial Watch said it appears Omar and her brother married in part “to assist his emigration to the United States from the United Kingdom” and to obtain federally backed student loans.

There is no guarantee that the OCE will do anything with the information provided by Judicial Watch. The office, which doesn’t have authority to issue subpoenas, has no more than 89 days to make a determination if a violation of law or regulation was committed.

At least three of the four voting board members are required to then forward the office’s determination to the House Ethics Committee. Even then, the ethics committee may do nothing.