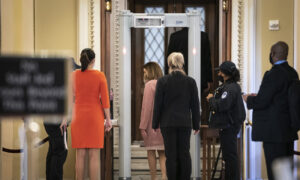 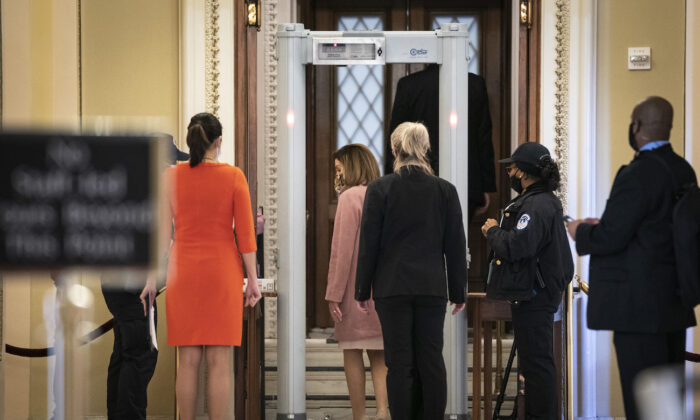 Speaker of the House Nancy Pelosi (D-Calif.) walks through a metal detector before entering the House Chamber at the U.S. Capitol in Washington, on Jan. 21, 2021. (Drew Angerer/Getty Images)
Congress

The 10-member panel on the House Ethics Committee voted Thursday to drop the $5,000 fine issued to Rep. Virginia Foxx (R-N.C.), who challenged the report by the Capitol that said she failed to complete a security screening before entering the House building.

This is the third time a majority of the evenly split bipartisan panel voted in favor of waiving the metal detector fee since the Jan. 6 protest at the Capitol.

In May the Capitol Police issued a report that documented an incident where Foxx set off a metal detector in front of a door to the House chamber. As two police officers tried to stop her, the report alleges that the representative threw her bag underneath the table near the magnetometer and entered the chamber to vote.

Foxx then returned to the screening area and allegedly “told the officers something in the effect of, ‘Good thing no one stopped me.'”

In her June 1 appeal letter to the Committee, Foxx wrote, “I appeal this fine because I dispute the facts as presented and request the opportunity to appear before the Committee to explain the facts surrounding this alleged violation.”

Another point of contention in the House has been around the wearing of masks. At the start of the CCP (Chinese Communist Party) virus pandemic, House Speaker Nancy Pelosi (D-Calif.) ruled that all members and aides must wear masks in the halls of the House and on the House Floor, while the Senate chose not to implement any mask requirements.

The House Ethics Committee has not agreed to the waiving of $500 fines against three Republicans who stopped wearing masks after the Centers for Disease Control and Prevention issued guidance in May that fully vaccinated people don’t need to wear face coverings.

Reps. Brian Mast (R-Fla.), Beth Van Duyne (R-Texas), and Mariannette Miller-Meeks (R-Iowa) were among the House Republicans who refused to wear a mask appealing to the Ethics committee to waive the fines, citing that they were complying with the Centers for Disease Control’s (CDC) guidance that said people can go without a mask if they are fully vaccinated.

“I am appealing Speaker Pelosi’s $500 fine because I was in full compliance with the CDC guidelines and it is unlawful. The scientists at the CDC told us if you are fully vaccinated, you can go about your life without wearing a mask or physically distancing. So, that’s what I’m doing,” Rep. Mast said. “It has never been about following the science for Speaker Pelosi. It has always been about power and control.”