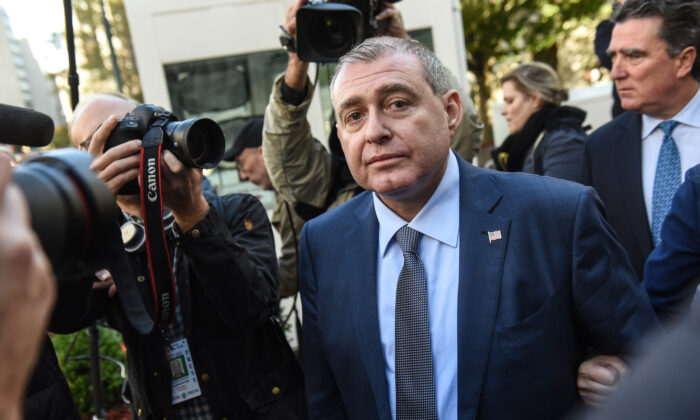 House Democrats released new documents they plan to submit to the Senate as evidence alongside the articles of impeachment against President Donald Trump.

On Tuesday, four Democratic House committee leaders—Judiciary Chair Jerrold Nadler (D-N.Y.), Intelligence Chair Adam Schiff (D-Calif.), Oversight Chairwoman Carolyn Maloney (D-N.Y.), and Foreign Affairs Chair Eliot Engel (D-N.Y.)—provided additional documents to the Senate Committee on the Judiciary. They said in a statement that the documents are additional evidence “to be included as part of the official record that will be transmitted to the Senate along with the Articles of Impeachment.”

The documents include phone records as well as other materials including texts and flash drives (pdf1, pdf2) that were handed over to the House Intelligence Committee by Lev Parnas—a businessman linked to former New York Mayor Rudy Giuliani—in compliance with a subpoena that he and another Giuliani associate, Igor Fruman, were served on Oct. 10, 2019.

The House chairs said they will not be making the phone records public as they contain sensitive personal information.

The four House chairs added that they have continued “to collect additional evidence” so that the House impeachment managers “can present to the Senate the most complete factual record possible.”

Part of the documents are communications that Parnas had with Giuliani—Trump’s personal attorney—and another attorney, Victoria Toensing, about the removal of Marie Yovanovitch, who was at the time the U.S. ambassador to Ukraine.

Giuliani earlier alleged that Yovanovitch blocked efforts to persuade Ukraine to investigate Joe Biden and Hunter Biden, according to The Wall Street Journal.

Also among the documents is a handwritten note on stationery from the Ritz-Carlton Hotel in Vienna that says “get Zalensky [sic] to Annonce [sic] that the Biden case will be Investigated,” and “start commun[icating] with Zalensky [sic] without (Pinchuk or Kolomoisky).” Democrats said in an accompanying letter (pdf) to the documents that Parnas’s attorney said that Parnas wrote the notes.

The release of documents comes after a federal judge earlier this month said that Parnas could provide materials to Congress as part of the impeachment proceedings.

The majority-Democrat House of Representatives formally charged Trump on Dec. 18, approving two articles of impeachment (pdf) for abuse of power and obstruction of Congress.

The Senate’s trial on the impeachment charges has not begun because the House has yet to pass the two impeachment articles to the Senate, but Senate Majority Leader Mitch McConnell (R-Ky.) said the trial will likely start next week, and House Democrats said they’d vote on sending the articles over on Wednesday.

Parnas and Fruman were arrested by federal authorities at Dulles airport in Virginia before a planned flight to Vienna on Oct. 9 and were later charged with conspiracy to violate campaign finance laws. Two other people were charged in the indictment, according to court documents (pdf).

The two Giuliani associates were also each charged with one count of false statements and one of falsification of business records. A separate charge alleges the four defendants colluded with a Ukrainian national as part of a business venture to create a recreational marijuana company.

Parnas and Fruman reportedly helped Giuliani in his efforts to investigate the origin of the Russia investigation. The two men are the subjects of an extensive report cited four times in the whistleblower complaint that triggered the Democrat-led impeachment inquiry against Trump.

The report, produced by the Organized Crime and Corruption Reporting Project (OCCRP), a group funded by billionaire financier George Soros, details meetings and communications between Parnas, Fruman, and Ukrainian nationals. The OCCRP published the report on July 22, four days after Trump ordered a hold be placed on military aid to Ukraine.

None of the charges Parnas and Fruman faced are related to the Ukrainian work they allegedly did on behalf of Giuliani. One of the allegations appears to refer to their efforts to lobby for the removal of Yovanovitch as U.S. ambassador to Ukraine. The whistleblower’s complaint refers to Yovanovitch’s removal but makes no mention of Fruman, Parnas, or Giuliani in connection to the firing.

In a letter (pdf) accompanying the subpoenas on Oct. 10, 2019, House chairs said that the Committees “are investigating the extent to which President Trump jeopardized national security by pressing Ukraine to interfere with our 2020 election and by withholding a White House meeting with the President of Ukraine and military assistance provided by Congress to help Ukraine counter Russian aggression, as well as any efforts to cover up these matters.”

Democrats’ push to impeach Trump revolves around his July phone call with Ukrainian President Volodymyr Zelensky, during which Trump asked his counterpart to “look into” allegations against former Vice President Joe Biden and his son Hunter Biden. Trump also asked Zelensky to probe CrowdStrike, a firm that investigated a potential breach into the Democratic National Committee’s computer systems.

Democrats alleged that Trump misused his office by allegedly withholding nearly $400 million from Ukraine and floated its release as a quid pro quo for investigations into the Bidens, saying that the request was improper because Joe Biden is running for the 2020 Democratic presidential nomination.

Zelensky said in October 2019 that the military aid that the Trump administration froze as it reviewed the funds over concerns of corruption in Ukraine was never linked to Trump’s requests in the July phone call. Trump said it was his duty to investigate corruption in a country that was receiving military aid from the United States.

Trump told reporters in early October 2019 that he had blocked the aid to Ukraine because of high levels of corruption in the country, and to push European partners to shoulder a greater share of security assistance.

In November, Trump’s reelection campaign tweeted a letter between Trump and Zelensky, saying that a visit was offered to the White House without any strings attached.