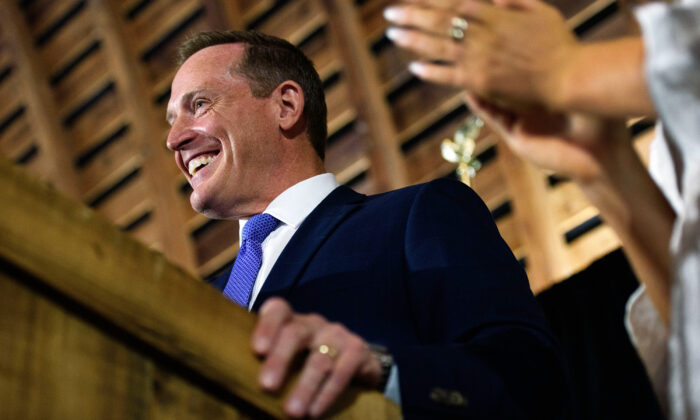 House Rules Committee Democrats killed an amendment offered by Rep. Ted Budd (R-N.C.) that would have redirected billions of tax dollars that the Senate has slated for hiring 87,000 new IRS agents to instead hire thousands of new border security personnel.

No changes were allowed by the Democratic majority to the Senate version of the Inflation Reduction Act approved by the Senate on Aug. 7 in a 51–50 vote; Vice President Kamala Harris cast the tie-breaking vote in the evenly split chamber.

“If we amend this, it basically derails the bill … any amendment at this point derails the bill,” committee Chairman Rep. Jim McGovern (D-Mass.) said during the five-hour meeting.

The measure includes $80 billion to hire the additional IRS agents—an expansion that would double the federal tax agency’s workforce. House Speaker Nancy Pelosi (D-Calif.) plans to put the legislation up for a vote in the chamber on Aug. 12.

The committee’s rejection of the Budd proposal spared Democrats in the chamber from a vote that would have put them on record favoring either doubling the size of the IRS or taking dramatic measures toward restoring control of the U.S. southern border, where record numbers of illegal immigrants have flooded into the country, along with unprecedented amounts of illegal, deadly drugs, including fentanyl.

With President Joe Biden’s popularity at record low levels, Republicans appear headed to regain the House majority in November’s midterm elections and could retake control of the Senate as well. With inflation roaring at the worst levels since 1981 and most Americans struggling to keep up with spiraling gas and food prices, voting to double the size of the federal tax agency could hurt Democrats who are facing tough reelection campaigns.

Budd couldn’t be reached for comment on the committee’s refusal to allow debate on his amendment.

“Instead of hiring 87,000 more IRS agents to treat working families like tax cheats, that funding should be directed to the crisis on the southern border. In Fiscal Year 2022, there have been over 500,000 ‘got-aways’ at the border, and 8,400 pounds of fentanyl has been seized,” the North Carolina Republican said in proposing the amendment in an Aug. 10 statement.

“We should be devoting more resources to the Biden Border Crisis, instead of making life harder for working families who are struggling under the weight of the Biden Recession.”

The Budd amendment also would transfer $25 billion to complete the border wall begun by President Donald Trump and retains $15 million to the IRS to install a new electronic tax return processing system. The tax agency currently has a backlog of 24 million unprocessed returns.

In addition, the amendment incorporates legislation previously proposed by Budd that provides that “not later than 24 hours after the date of the enactment of this Act, the Secretary of Homeland Security shall resume any project relating to the construction of physical barriers, tactical infrastructure, and technology along the international border between the United States and Mexico that were underway, or being planned for, prior to January 20, 2021.”

To ensure construction resumes, the amendment further provides that “the [DHS] Secretary may not cancel any contract for activities related to the construction of the border barrier system that was entered into on or before January 20, 2021.”

And the amendment requires DHS to “ensure that all agreements executed in writing between the department and private citizens, state, local, or tribal governments, or other stakeholders are honored by the department relating to current and future construction of the border barrier system as required by such agreements.”

Budd is battling his Democratic opponent, former state Supreme Court Judge Cheri Beasley, in the North Carolina Senate race to succeed retiring Sen. Richard Burr (R-N.C.). Budd has been a strong and vocal supporter of Trump, who has endorsed his Senate candidacy.

Budd won another important endorsement on Aug. 10 when a key North Carolina law enforcement group announced its support for him.

“Ted Budd knows the dangers faced by the men and women serving in law enforcement,” Ben Kral, president of the North Carolina Troopers Association, told Fox News Digital. “He knows we play a critical mission in keeping our communities safe and Ted Budd respects and appreciates the sacrifices made by law enforcement officers and our families.”

In a related development, Budd also introduced an amendment to the Inflation Reduction Act to would bar the IRS from using any of the funds for hiring the additional 87,000 agents to audit any taxpayer making less than $400,000 annually.

“Contrary to the claims of Congressional Democrats, the massive IRS funding increase will have a catastrophic effect on America’s small businesses and those who don’t have the money to afford high-priced tax attorneys. Working families should not be treated like tax cheats, and my amendment will ensure that they are protected,” Budd said in a statement.