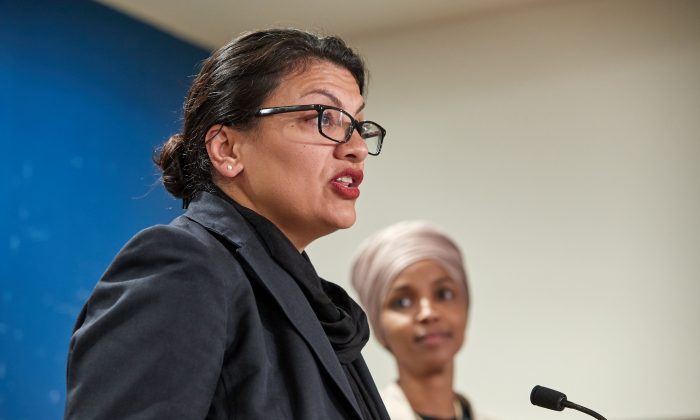 House Democrats’ Threat to Retaliate Against Israel Is Disgraceful, Plays Into Omar and Tlaib’s Hands

That law prohibits the granting of a permit for entry into Israel if the individual “has knowingly published a public call to engage in a boycott against the State of Israel or has made a commitment to participate in such a boycott.”

While Israel’s decision was based on established law, House Democrats have threatened to retaliate against Israel. If Democrats do so, they will be penalizing one of the United States’ strongest allies simply because it followed a law that’s there for its own protection.

“Senior Democratic members of Congress are considering legislative action against Ron Dermer, Israel’s ambassador to Washington, and David Friedman, the U.S. ambassador to Israel, according to McClatchy.

“According to the report, the Democrats are discussing a possible vote on a statement of no confidence in Dermer, as well as the opening up of an inspector general investigation into Friedman.”

To put this into perspective, House Democrats are threatening to punish two individuals simply because a sovereign and independent nation followed its law and banned two women from entering the country who unequivocally violated Israeli law.

This tit-for-tat approach is childish and risky, as there’s absolutely no compelling reason why Democrats should take any action against Dermer, Friedman, or anyone else associated with Israel.

“Congresswomen Rashida Tlaib and Ilhan Omar have a well-documented history of anti-Semitic comments, anti-Semitic social media posts, and anti-Semitic relationships. Israel has the right to prevent people who want to destroy it from entering the country—and Democrats’ pointless congressional inquiries here in America cannot change the laws Israel has passed to protect itself.”

Should congressional Democrats decide to take retaliatory action against Israel, they will be playing into Tlaib’s and Omar’s hands and legitimizing their abhorrent comments calling for the boycott of the state of Israel.

“We in the United States have a constructive role to play. We give Israel more than $3 billion in aid every year. This is predicated on them being an important ally in the region, and the only democracy in the Middle East. But denying a visit to duly elected members of Congress is not consistent with being an ally. …

“[Lawmakers] have a responsibility to conduct oversight over our government’s foreign policy and what happens with the millions of dollars we send in aid. …

“The decision to ban me and my colleague, the first two Muslim-American women elected to Congress, is nothing less than an attempt by an ally of the United States to suppress our ability to do our jobs as elected officials.”

Omar is wrong on several fronts. First, just because she and Tlaib are members of Congress doesn’t, in and of itself, grant them unfettered entry into another country, let alone Israel.

Second, Omar’s claim that the ban prevented her and Tlaib from doing their jobs as elected officials is easily refuted. To the contrary, according to Prime Minister Benjamin Netanyahu and David M. Friedman, the U.S. ambassador to Israel, their itinerary was exclusively focused on meeting with hard-line boycott, divestment, and sanctions (BDS) activists and planning a campaign whose sole purpose was to strengthen the boycott of Israel and to negate Israel’s legitimacy. Their visit had nothing to do with their apparent “oversight responsibility.”

As Netanyahu put it, their visitation plan “shows that their intent is to hurt Israel.” This is obviously not the job of a member of Congress.

If House Democrats decide to punish the Israeli ambassador to the United States or the U.S. ambassador to Israel, it would be reasonable to assume that they align with or support the views expressed by Tlaib and Omar, who are slowly becoming the face of the Democratic Party. After all, this was the perfect opportunity for House Democrats to come out and defend Israel. However, rather than defending Israel, one of America’s strongest and most reliable allies, and condemning the ongoing and vulgar anti-Israel rhetoric espoused by these two women, House Democrats blasted Netanyahu’s decision and threatened to retaliate.

Clearly, there is no compelling reason for why House Democrats would dare to retaliate in this fashion. In essence, House Democrats are threatening to punish the state of Israel for lawfully enforcing its laws, which are there for its own survival. House Democrats are free to disagree with Netanyahu’s decision. However, they should not punish Israel or its ambassadors for this decision, as other nations have made similar decisions in the past.

As a sovereign and independent country, Israel had every right to ban Tlaib and Omar in accordance with Israeli law and based on their previous statements and their most recent itinerary.

House Democrats, on the other hand, have no basis to retaliate against Israel or its ambassadors. If they do, they won’t be hurting Trump or Netanyahu. Rather, they will be hurting relations between two longtime allies for no compelling reason.