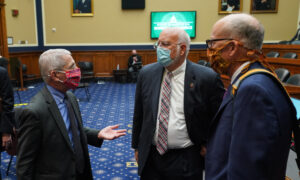 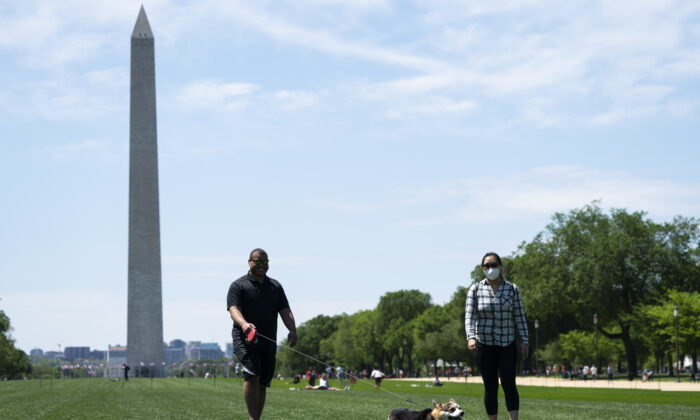 People wear protective masks as they walk a corgi on the National Mall in Washington on May 2, 2020. (Sarah Silbiger/Getty Images)
Politics

House Democrats approved a bill to admit the District of Columbia as a state on Friday, marking the first time that a congressional chamber has passed a measure to make the city into a state.

The measure was introduced by Washington’s nonvoting House member, Del. Eleanor Holmes Norton, a Democrat, and it would limit the federal capital to a small area that encompasses the White House, Capitol, Supreme Court, and other federal buildings.

Norton wrote that it “[marks] the first time since the creation of the District of Columbia 219 years ago that either chamber of Congress has passed a bill to grant statehood to D.C. residents and, with it, equal citizenship.”

The remaining part of Washington would become the 51st state, called the Washington, Douglass Commonwealth. The area would have a population of around 700,000 people, according to the U.S. Census Bureau.

President Donald Trump and numerous GOP members have said they won’t support the measure, with Trump saying that it will guarantee two more Democratic senators and at least one Democratic member of the House of Representatives.

“DC will never be a state,” Trump told the New York Post. “You mean District of Columbia, a state? Why? So we can have two more Democratic … Democrat senators and five more congressmen? No thank you. That’ll never happen.”

The White House issued a statement on Wednesday, formally opposing Norton’s bill. He vowed to veto the measure if it reached his desk.

The Office of Management and Budget (OMB) said in its own statement that the president would be advised to veto the bill if it clears the Senate.

“In addition, H.R. 51 would create an opportunity for a new State of Washington, D.C. to dominate the capital and render those who meet there beholden to its interests, rather than the interests of the Nation as a whole,” the OMB statement said.

House Majority Leader Steny H. Hoyer (D-Md.) told reporters that Democrats are “committed to getting it to be law, and as long as it takes us. We’re going to take John Lewis’s advice.”

“We’re going to keep our eye on the prize, which is statehood, for the District of Columbia,” he added.

Republican lawmakers said that the statehood measure would require a constitutional amendment.

Rep. Gregory Murphy (R-N.C.) told the House floor that Congress should give the land back to Maryland instead of making the city its own state.

“The move is simply unnecessary when ceding D.C. back to Maryland is a viable, cost-effective and common sense option,” Murphy said, adding that the “District of Columbia requires a constitutional amendment to change.”

“The Framers of the Constitution … were very clear about this,” he added. “The Supreme Court reaffirmed this in 1949.”

It’s the first time that Congress has voted on the D.C. statehood initiative since 1993, although the issue has been debated for decades.

Senate Majority Leader Mitch McConnell (R-Ky.) told Fox News last year that the push for statehood is “full-bore socialism on the march in the House,” adding that “as long as I’m the majority leader of the Senate, none of that stuff is going anywhere.”

House Speaker Nancy Pelosi (D-Calif.), a supporter of the bill, said on the House floor that “statehood for the district is about showing respect for our democracy,” adding that it is “about democracy for the American people and for our US Constitution.”