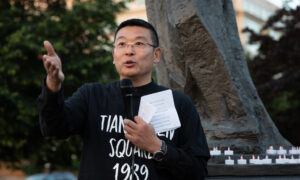 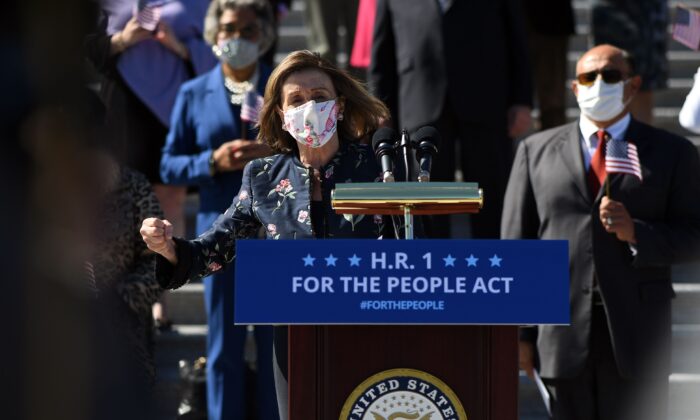 Speaker of the House Nancy Pelosi (D-Calif.) speaks at an event for the "For the People Act of 2021" on the steps of the Capitol in Washington on March 3, 2021. (Eric Baradat/AFP via Getty Images)
Congress

A landmark bill was approved late Wednesday by the House of Representatives to federalize and make permanent many of the election reforms adopted as temporary measures in 2020 by a handful of states in response to the CCP Virus pandemic.

The election reforms including radically expanded mail-in, early and absentee voting, as well as automatic, online and same-day voter registration with minimal verification, were followed by widespread allegations of voter fraud in seven states that marred the 2020 presidential contest between then-President Donald Trump and former Vice-President Joe Biden, the ultimate declared winner.

In addition, the measure — the “For the People Act of 2021” — requires states that have not already done so to establish independent commissions for congressional redistricting, restructures the Federal Election Commission (FEC) as a partisan-majority rule campaign regulatory agency and creates extensive new restrictions on freedom of speech during campaigns.

The bill further establishes millions of dollars in new campaign funding sourced from corporations, requires disclosure of donors to religious and non-profit advocacy groups, and enables incumbent congressmen and their challengers to receive a salary from campaign funds.

The final tally in the House showed 220 Democrats voting for passage and one against, as well as 210 Republicans who opposed the proposal. Two Republicans did not vote. There are currently three vacant seats in the House.

During a news conference on the Capitol steps earlier in the day led by Speaker of the House Nancy Pelosi (D-CA) and attended by dozens of her Democratic colleagues, she compared the floor debate on H.R. 1 to the bitterly cold Valley Forge winter encampment in 1776 by the American Revolutionary troops, which many historians consider the low-point of the War for Independence.

“Everything is at stake, we must win this race, this fight for this bill because at the same time we are gathering here to honor our democracy over 200 bills are being put together to suppress the vote,” Pelosi claimed.

She was referring to efforts in multiple state legislatures since November 2020 to tighten up voter registration, ballot counting and security, and election-day procedures. Democrats typically condemn such proposals as efforts to make it more difficult for minority voters to cast ballots, while Republicans argue the measures are needed to prevent voter fraud.

The comprehensive scope of the bill prompted House Rules Committee Ranking Minority Member Tom Cole (R-OK) to remark during debate that, “this is a bill that’s about preserving the present Democratic majority. It is a bill by the majority, for the majority, and is intended to entrench the majority in power for years to come.”

And House Administration Committee Ranking Minority Member Rep. Rodney Davis (R-IL), who managed opposition presentations during the floor debate, focused on the provision that diverts funds paid by corporations on a multitude of federal fines to campaign donations for congressmen.

“The Democrats’ number one priority is a bill that funds their own campaigns. H.R. 1 would launder corporate dollars through the Treasury and use those dollars to publicly fund congressional campaigns. Based on the 2020 fundraising numbers, that creates access to more than $7 million in public funds to bolster my colleagues’ campaign coffers by providing a 6-to-1 funding match to small donations.

“I know when I speak with my constituents back home, establishing a program that helps me acquire more money for my campaign is not what they think the federal government should be working on,” Davis said.

The House spent most of Tuesday and into Wednesday debating 56 amendments approved by the Democratic leadership for floor consideration. Only seven of the 56 were introduced by Republicans.

One of the amendments was introduced by Rep. Ayanna Pressley (D-MA) and would have mandated that 16- and 17-year-olds be allowed to register and vote in federal elections. The Pressley amendment was defeated, while all but a handful of the other amendments were approved.

The huge HR1 measure was rushed through the House by Speaker of the House Nancy Pelosi (D-MD) and House Majority Leader Steny Hoyer (D-MD) with minimal committee hearings or markups.

Opponents of the measure outside of Congress included the National Disability Rights Network that worried about increased use of paper ballots, a coalition of 130 non-profits that oppose being forced to disclose the names of donors, 16 Secretaries of States and other state election administration officials, and nine former FEC commissioners.

A nearly identical bill passed the House in 2019 but went nowhere in the then-Republican-controlled Senate. This time around, passage in the Senate remains uncertain as the upper chamber is split evenly between the two parties, leaving Vice-President Kamala Harris to break ties.

But if Republicans filibuster the proposal, as seems likely, Senate rules require 60 votes to “invoke cloture,” which limits debate to 30 hours and then requires a vote on final passage.