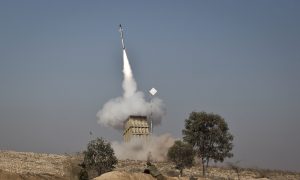 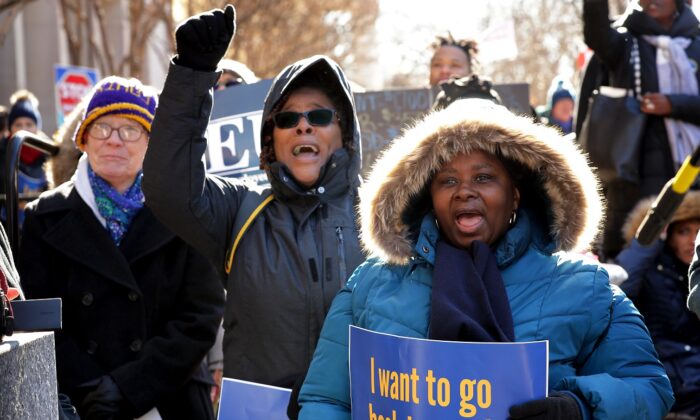 Union organizers hold rallies outside the headquarters of the AFL-CIO calling for an end to the government shutdown in Washington on Jan. 10, 2019. (Chip Somodevilla/Getty Images)
Politics

WASHINGTON—House Committee on Education and Labor Chairman Rep. Bobby Scott (D-Va.) will convene a markup session Sept. 25 on a bill that, if passed, would abolish right-to-work laws now on the books in 27 states, and provide organized labor with its biggest boost in power in decades.

The bill—H.R. 2474, the Protecting the Right to Organize Act of 2019 (PRO Act)—has 208 House co-sponsors, all Democrats. Sens. Patty Murray (D-Wash.), Sherrod Brown (D-Ohio), and Jacky Rosen (D-Nev.) introduced the companion bill in the upper chamber, where it now has 40 Democratic co-sponsors.

They also say it invites more union corruption such as that exposed in recent months by federal investigators probing the United Auto Workers (UAW). Foxx and Wahlberg told Scott in a Sept. 19 letter they want the committee to convene a hearing to review the UAW situation.

Scott hasn’t officially responded to the letter, according to the committee’s GOP spokesman, Audra George. The committee’s Democratic spokesman, Josh Weisz, didn’t respond to multiple requests from The Epoch Times for comment.

With 28 Democrats on the panel, versus 22 Republicans, and House Speaker Nancy Pelosi (D-Calif.) and House Majority Leader Steny Hoyer (D-Md.) both enthusiastic PRO Act backers, there is little doubt the measure will be approved by the lower chamber. With Republicans running the Senate, though, it’s equally certain the bill won’t see the light of day in the upper chamber.

Foxx and Wahlberg also told Scott the PRO Act “would overturn the Right-to-Work law in Michigan and in the other 26 states with such laws. That means that workers who do not wish to join the union in their workplace would be forced to pay hundreds of millions of dollars a year to a labor union, regardless whether its leaders were using those dues on collective bargaining and representation costs—like they are supposed to—or on sports cars, golf trips, and parties, like they were at the UAW.”

The two Republicans continued, telling Scott that “we believe it is essential the committee confront the widespread, brazen law-breaking by union leaders who purport to represent nearly 150,000 American auto workers but have betrayed their trust in favor of self-enrichment.”

Just how widespread the corruption is inside the UAW is only now beginning to be understood, as federal investigators and prosecutors continue a probe they launched nearly three years ago. Elements of the FBI, Department of Labor, IRS, and Department of Justice are involved in the investigation.

To date, 10 UAW officials have been indicted, including a former union vice president, and the FBI recently raided the homes of current union President Gary Jones and of former UAW chief Dennis Williams, in what appears to be an expanding probe.

In addition, five UAW members and three Fiat Chrysler executives have been convicted on multiple charges related to misuse of union and company funds in connection with the jointly funded National Training Center (NTC).

“Union leaders misused over $4.5 million in NTC funds to pay for outrageous personal expenses such as a $350,000 Ferrari, two $37,500 pens, hundreds of thousands of dollars of private home improvements and mortgage payments, and a $30,000 party,” Foxx and Wahlberg told Scott.

They also quoted an assistant U.S. attorney who said “there was a culture of corruption inside the senior leadership of the United Auto Workers union.”

Canceling right-to-work laws that have been in force for decades since they were authorized by Section 14(b) of the Taft-Hartley Act of 1947 and encouraging more internal union corruption are far from the only problem Republicans have with the PRO Act.

The proposal also requires companies to provide unions with the home addresses, email addresses, cellphone numbers, and much other private information about employees, as well as compromising the right to secret ballots in union representation elections, legalizing secondary boycotts and increasing penalties for company executives convicted of violations of the National Labor Relations Act.

National Right to Work Committee President Mark Mix also denounced the proposal, telling The Epoch Times that “with the rapidly expanding corruption scandal at the UAW union now reaching the highest levels of the union hierarchy, we should be looking to give workers more ways to hold union officials accountable, not expanding union boss power over rank-and-file workers.

“Unfortunately, the PRO Act would only limit further the tools rank-and-file workers have to check the power of self-serving union officials … it also allows union bosses to have federal officials impose a forced dues union contract on workers, even in instances when a majority of the workers have never even voted in favor of unionization.”

Union membership has plummeted, with less than 7 percent of all private-sector workers now represented by organized labor. A third of government workers are union members.